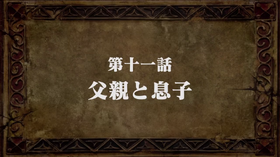 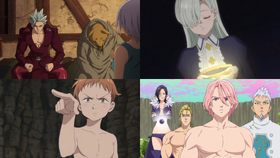 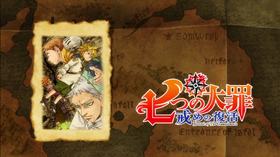 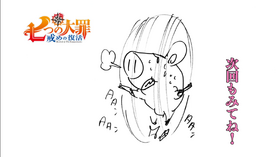 Father and Son「父親と息子 Chichioya to Musuko」 is the eleventh episode of Season 2 of the The Seven Deadly Sins anime.

A frail Zhivago reunites with Ban, is long-lost adopted son. Meanwhile, a wary King confronts Meliodas about his true intentions.

Jenna is watching through the orb as King and Meliodas fight each other. King asks Meliodas to answer the question. Meliodas says that it depends on his definition of an ally. He goes on to say that if King were to turn against Elizabeth and the Seven Deadly Sins then Meliodas would be his enemy. Zhivago can't believe that Ban is here. Ban asks him why he didn't tell him that he was a werefox. Zhivago says that he was afraid Ban wouldn't look at him the same way. Jericho starts to cry because she's just so glad that they found each other. Zhivago asks if Jericho is Ban's girlfriend to which he replies no. Jericho asks what she is then and Ban says his wallet or little sister. Jericho asks if he even had a little sister. Ban says he did but she died when she was four. Zhivago asks Ban how he can look like he's twenty years old if he's sure to be at least forty. Ban tells him that he drank from the fountain he told him about as a kid. That he won't grow old or die. Zhivago remembers when he told Ban the story about the fountain of youth. He's shocked to learn that such a thing exists because when he told Ban he thought it was nothing more than a fairy tale. Zhivago asks Ban if there really was a saint guarding it and Ban says that she died.

A fairy asks Gerheade what's wrong and she says that there is an ominous air surrounding this area. She says it feels like everything that makes sense in this world is going to be turned upside down. Zhivago tells Ban that he's also heard the rumors about bringing people back from the dead over the last few days but that he doesn't know anything else about it. Ban says it's alright that he'll just keep looking. Zhivago says that it must be painful because he can't die anymore and can't follow Elaine to death. Ban says it's painful but that isn't going to bring Elaine back to life. Zhivago tells him that he's glad that Ban found something that he valued more than himself. Ban says that Jericho is the first human that he's actually willing to tolerate. Zhivago says that he has something else on his mind. Ban tells him that he found both a friend and a lover but that it couldn't last. That he had to choose between the two of them and he chose to kill his friend. Zhivago asks if he went through with it and Ban says no. Zhivago says he understands what he's going through because he had to choose between Ban and Selion.

Ban tells him it's not the same because he beat up Meliodas but even after all Meliodas did was smile and forgave him. Zhivago says that Ban is afraid of depending on Meliodas. Ban says yes because he's a piece of crap that can't be saved. Zhivago puts an arm around him and tells Ban that Meliodas sounds like a great friend. He tells Ban to go back to Meliodas and beg for forgiveness with all his heart. Zhivago dies after he tells Ban this. Zaneri leaves Elizabeth alone while she tries to make her bud bloom. King tells Meliodas to fess up that he's really a member of the Ten Commandments. Jenna asks Merlin what King has done to Meliodas and Merlin tells her that King's true power is disaster. King tries to attack Meliodas again but Meliodas sends the attack back to him. Nothing happens to King. Meliodas asks King if he really is the fairy king. King is confused and Meliodas says that if he's really the fairy king then where are his wings. King tells Meliodas to shut up because he's the one asking the questions. King condenses his power into a tiny droplet and attacks Meliodas. Meliodas steals the idea and uses it to condense his own power. He's surprised when it works. Jenna calls them out of the training. King tells Meliodas that if he ever betrays the trust that Ban and Diane have in him that King will never forgive him.

They exit the cave and Meliodas asks Jenna to restore his power. She summons her staff and a Goddess amber appears. Meliodas's power is inside. She breaks the amber and releases his power. She directs it back into his body. After, he asks Merlin if she can send him to the Ten Commandments. She says yes but that he has to survive for ten seconds on his own before she'll be able to bring him back. Meliodas agrees to the terms and disappears. He reappears before the Ten Commandments. Galand says that he's his since he didn't finish him off the first time. Meliodas attacks him and proceeds to kick his butt. Galand says that he seems different and Meliodas says that he got some more power. Jenna is worried that Meliodas didn't seem any different for someone who gave up their emotions. Zaneri says that he didn't give them up but that he has control over his new wrath now. Meliodas tells the Ten Commandments that he just wanted to say hi and talk a little. Zeldris says that there is nothing to talk about and that they will take vengeance on them. Meliodas says that that's a cold thing of him to say despite them being brothers. Meliodas tells them that if they plan to pick up where they left off that the Seven Deadly Sins will stop them. Fraudrin and Zeldris attack Meliodas but he disappears before they can touch him.

Galand lays on the floor having been beaten to a pulp. He muses that that must be the power of the cursed demon. He screams into the night.

Retrieved from "https://nanatsu-no-taizai.fandom.com/wiki/Revival_of_The_Commandments_Episode_11?oldid=115530"
Community content is available under CC-BY-SA unless otherwise noted.