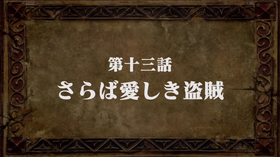 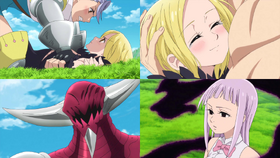 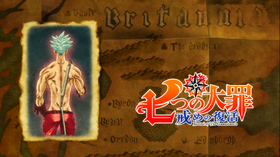 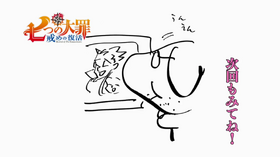 Farewell, Beloved Thief「さらば愛しき盗賊 Saraba Itoshiki Tōzoku」 is the thirteenth episode of Season 2 of the The Seven Deadly Sins anime.

A revived but possessed Elaine attacks her lover, Ban, as Melascula and Galand of the Ten Commandments emerge to destroy those in their path.

Elaine and Ban continue to kiss passionately. Jericho tries to convince Ban to step away from Elaine. Instead, Elaine blasts Jericho away with her power. Ban tells Elaine that Jericho is no threat to them but Elaine is convinced that Jericho wants to steal Ban away from her. She goes to get rid of Jericho but Ban stops her and tells her that she's the only woman for him. Elaine slashes at Ban and asks if that's true then why is he protecting Jericho. She continues to hurt Ban as she explains that it was her dream to travel with Ban but Jericho stole that dream from her. Jericho tries to stop Elaine but Elaine sends a blast of power her way again. Jericho dodges and manages to pin Elaine to the ground. She asks Elaine if she loves Ban. Elaine says yes and Jericho confesses that she's in love with him too. Elaine tells Jericho that Ban will never look at her that way. Ban tells Jericho to get away from her that Elaine's mind is being controlled by someone else. Jericho tells Elaine that she's a way better match for Ban. That she'd do anything for him because he saved her life. She also says that she'd rather die than hurt him. Jericho starts to cry and tells Elaine that it doesn't matter because he only cares for her.

Jericho continues to straddle Elaine and tells her that Elaine being controlled is a load of crap. That if Elaine's love for Ban is as strong as it is then how could she allow herself to hurt him. Elaine says she doesn't know what's happening to her as she throws Jericho off of her. She starts to scream that someone needs to stop her because she can't control herself. Ban grabs Elaine and tells her that they can travel together forever. Jericho watches nearby. Suddenly, Ban yells Elaine's name as it looks like she's passed out. Melascula and Galand appear. Melascula explains that only Elaine's regrets and anger were keeping her alive and that without that she'd return to being dead. Ban gives Elaine to Jericho to take care of as he turns to face Melascula. He tells them that he's going to kill them. Galand attacks Ban and cuts him in half. Ban heals and Galand asks how that's possible. Ban says that there is nobody who can kill him. Melascula tells Ban that the Seven Deadly Sins intrigue her and she asks if they're all as curious as he is. Ban says he believes so before Galand punches his head off.

Galand believes that he's destroyed Ban but Ban grows his head back. Galand admits that he's underestimated Ban and offers him one free punch. Ban tells him that he's going to regret that decision as he attacks Galand using his magic. Galand falls to the ground and asks what's happening to his body. Melascula explains that another part of Ban's magic is stealing the strength from anything nearby and adding it to his own. Ban hits Galand again as Jericho and Elaine watch. Suddenly, Melascula surrounds Ban in darkness. She tells him that he's passed the test. Ban is confused and Melascula explains that he has a pure soul because he never lost faith in Elaine. Melascula touches Ban and makes his soul emerge from his mouth. Elaine tries to help his soul escape but Galand grabs the soul and shoves it into his mouth. Melascula is upset because she's the one who defeated Ban so she should get his soul. Jericho can't believe that Ban is dead because he's immortal. Jericho vows to avenge him but suddenly Ban tells her not to worry about him.

He attacks both Melascula and Galand eliminating one of their hearts. While they're distracted he grabs Jericho and Elaine and bolts. Melascula says that they can take their sweet time hunting him down because Ban absorbed too much energy so the toll on him must be high. Ban stops and drops Jericho before collapsing. Elaine touches his face and tells him that she thought she'd never see him again. Ban explains how Zhivago used his own soul to act as a distraction so that Ban's could escape. Ban asks Jericho to take Elaine and escape. Jericho asks what about him and Ban says that he'll catch up. Elaine tells Jericho to take Ban and leave because she's bound to die again since her resurrection is only temporary. A frustrated Jericho picks both of them up instead. Fraudrin is walking through a market when he's stopped by Deldry. Fraudrin asks if they've met before and Deldry reveals that she is a member of the Pleiades of the Azure Sky and reports to Denzel Liones. Fraudrin tries to attack her but ends up hitting himself instead. Her magic forces him to be loyal to her so despite trying to kill her he can't.

Suddenly, Fraudrin is shot in the back by arrows. Deldry is upset because one grazed her. Arden appears and throws knives at Deldry but Fraudrin blocks them. He goes to send them back to Arden but finds that he can't. Fraudrin asks Arden what he did to him and Arden explains that now he has to consume five times as much in order to recover his magic. Fraudrin attacks Arden but it's blocked by Waillo. Waillo hits Fraudrin with his sword and Fraudrin falls to the ground. They decide to take Fraudrin and leave before they draw a crowd.

Retrieved from "https://nanatsu-no-taizai.fandom.com/wiki/Revival_of_The_Commandments_Episode_13?oldid=118304"
Community content is available under CC-BY-SA unless otherwise noted.