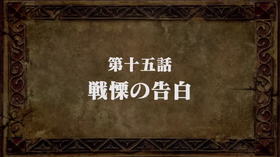 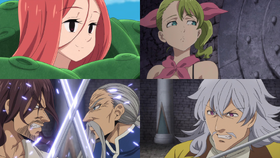 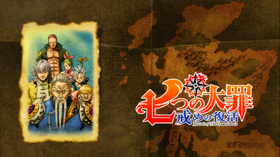 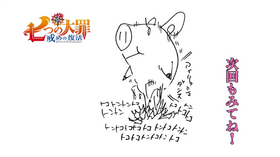 A Bloodcurdling Confession「戦慄の告白 Senritsu no Kokuhaku」 is the fifteenth episode of Season 2 of the The Seven Deadly Sins anime.

Gloxinia and Drole of the Ten Commandments lure strong fighters to the Vaizel by offering to grant any wish to the winner of their Great Fight Festival.

Fraudrin is chained to a chair when Denzel Liones arrives. Denzel explains that they're in Zeldon's Research Facility and that it was built in secret so that Denzel could continue his research on the demon race. Denzel stabs Fraudrin with a holy sword. Fraudrin tells him that when he hurts him he also is hurting Dreyfus. He breaks out of his bonds and pulls the sword from his shoulder. Fraudrin tells Denzel that he must really want him to kill Denzel today. Denzel says that he's here to prove that Fraudrin isn't invincible and that even a mere human can defeat his kind. He continues on to say that he's sure Dreyfus would lay down his life for this cause. Diane can't believe that Matrona is alive and that she has kids. Matrona explains that they are the kids of her lover's late wife but that she loves them all the same. Diane is in awe of how much Matrona has changed. Matrona says that it's been sixteen years since she almost died. She goes on to explain how Zalpa saved her but that Diane also did something that helped her stay alive. She let the barbarians go during that fight they had days earlier and that Zalpa had been one of those barbarians. If she hadn't shown mercy, Matrona wouldn't be here today or have Zalpa in her life.

Matrona asks Diane if she knows how she lost her memories of the past sixteen years but Diane doesn't how it happened. Matrona also mentions the Ten Commandments but this frightens Diane so she says that they don't have to talk about it. They continue on with their dance lesson. Diane tries to do it on her own but can't sense the Earth. Suddenly, a bird-like monster flies overhead and drops a bunch of flyers. She grabs one and it says something about the Vaizel Fight Festival. Meliodas reads the flyer aloud and considers the prize but Howzer is sure that it's a scam. Gilthunder desperately wants to join the festival with Meliodas. Hendrickson and Hawk both think that it's a trap. Meliodas decides that they'll stop by and check it out because it sounds like fun. Gloxinia tells Drole that a festival is a perfect way to lure them in. She's also confident that Meliodas will take the bait as well. Diane continues to dance and feels like she's becoming one with the earth. Suddenly, Diane stops and Matrona senses it so she goes to investigate. She finds Sol and Della injured by the creek with a demon looming over them. She kills the demon and takes the children home.

Matrona blames herself but Zalpa says that he is also to blame. Diane asks if the children are going to be okay and Zalpa says he doesn't know because their wounds are deep. Matrona tells them that she's going to Vaizel so that she can win and get a wish as a prize. Diane says that it sounds suspicious. Zalpa tries to stop Matrona from leaving but she goes anyway. Zalpa tells Diane to take Gideon and go with Matrona. He asks her to look out for her and for both of them to come back. Diane nods and goes after Matrona. Gloxinia and Drole can sense the powerful souls approaching. They are both anxious for their arrival. Arden, Deldry, and Waillo stand guard outside of the research facility. Arden is playing with an incantation orb but almost drops it. Luckily, Waillo catches it and hands it back to Deldry. Inside, Fraudrin and Denzel are going head to head. Fraudrin tries to attack Denzel but his magic is delayed. It's because of Deathpierce magic. Fraudrin tries to escape by breaking through the wall but can't because they are inside a perfect cube and only Deldry, Waillo, or Arden can break it from the outside.

Arden suggests that they go to Vaizel and join the festival. Dogedo arrives and tells them that he'll take over guarding if they want to go. He just needs them to hand over the incantation orb. Suddenly, the perfect cube starts to break apart and Dogedo walks into the chamber. Or at least it's someone who looked like Dogedo as it turns out to be Grayroad in disguise. While on their way to Vaizel, Arden, Deldry, and Waillo run into the real Dogedo and realize their mistake too late. Fraudrin offers for them to start over and this time have it be two against two. Denzel sheathes his sword and tells Fraudrin that he'll allow him to escape this time. Deathpierce protests but Denzel explains that Grayroad is the commandment of pacificism. If they were to destroy Fraudrin then the commandment would retaliate and they would be cursed. Fraudrin and Grayroad leave but not before Fraudrin reveals to Deathpierce that the next time they fight he won't hold back. As they are leaving, they run into Arden, Deldry, Waillo, and Dogedo. Deldry yells at him for coming out without her sayso but he stabs her through the stomach proving that her magic has worn off.

Before he leaves, Fraudrin reveals to them that he isn't really one of the Ten Commandments. In fact, he's a substitute. The real one is missing. He tells them that he sensed him the other day and that he froze when he saw him. This commandment has no memory of who he is as that's a manifestation of his own commandment curse. Fraudrin tells them to listen close and he'll reveal what the commandment's name is. He says that his name is Gowther the Selflessness.

Retrieved from "https://nanatsu-no-taizai.fandom.com/wiki/Revival_of_The_Commandments_Episode_15?oldid=116025"
Community content is available under CC-BY-SA unless otherwise noted.