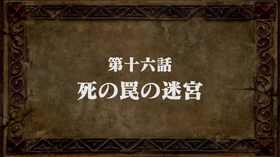 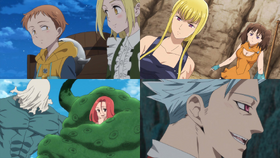 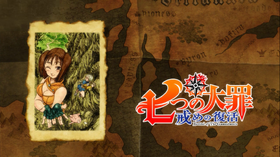 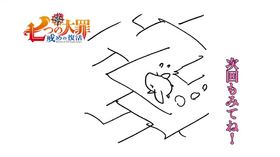 Shi no Wana no Meikyū

Death-Trap Maze「死の罠の迷宮 Shi no Wana no Meikyū」 is the sixteenth episode of Season 2 of the The Seven Deadly Sins anime.

An elaborate trap-laden deadly maze constructed by Drole begins to weed out the weaker challengers that have gathered for the Great Fight Festival.

Elaine is so happy to see King again. King feels the same although now that he knows everything is alright he's gone back to worrying about Diane. Elaine tells him as much and reveals that she read his mind. King says that he was never good at doing that. Ban asks Escanor how much farther until they arrive at the place where they're making the delivery. Escanor says that they're almost there. Matrona tells Diane that she still has time to turn back. Diane says no and Matrona comments that she's as stubborn as ever. They arrive at a gigantic maze. Matrona believes that someone of the giant race must've built it since it's so huge. She decides to use her magic to strike through all the walls and smashing her way to the finish line. But after she tries that the wall just grows back. Diane thinks that they can walk atop of them maze but when she tries to she gets hit in the head by a beam and falls back to the ground. Gloxinia is impressed by Drole and the Death-Trap Maze he created. It's acting as the first hurdle of the Vaizel Fight Festival. He says that they more people came than expected so they can weed out the weak ones first.

Matrona and Diane work their way through the maze. They become separated after Matrona believes that she saw her children in the maze. Diane is falling asleep when she smells something. She opens her eyes to find Hawk standing in front of her. She tries to lure Hawk to her so that she can cook and eat him. Elizabeth shows up to save Hawk and tries to get Diane to remember who she is. She explains how Diane lost her memories and ran off. Diane tells Elizabeth that she seems nice but she can't trust humans. She gets up and tells Elizabeth not to follow her. Elizabeth boldly decides to follow her anyway. The trio continue to walk through the maze but Elizabeth and Hawk almost fall to their death when the ground opens up beneath them. Luckily, Diane catches them and saves them. Hawk finds food but Diane continues walking despite being hungry. She comes across a swamp and steps into it only to be covered by giant leeches. Elizabeth dives into the water and restlessly pulls all of them off her legs. After, Diane asks Elizabeth why she helped her and Elizabeth tells her that that's what friends are for.

Hawk arrives with a load of berries and offers them to Diane. Diane eats them just as Meliodas walks up. Or something that looks like Meliodas. There are multiple copies and all are angry about the creation of the maze. Hawk thinks that they are Hide-and-Seek. In order to figure out which one is the real Meliodas, Hawk asks them what their favorite part of Elizabeth is. Instead, they tell them what their favorite pork parts are and attack. Elizabeth jumps onto Hawk's back and they run off. Hawk says that the good news is that Meliodas must be nearby if they look like him. Hawk asks Diane to take care of them but she can't because they look like Meliodas and she'd never hurt them. They all start to run away when the Hide-and-Seeks get blasted by wind and lightning. Howzer and Gilthunder appear and send the Hide-and-Seeks running. Elizabeth asks Gilthunder where the others are and he explains that they all got separated after falling into a series of traps. An Earth Crawler grabs onto Howzer from underneath the ground. He stabs it but it gets away. Hawk finds it but it latches on to his nose. He eats it in retaliation and ends up transforming into it. Apparently, that's his magical power.

Gilthunder says that those were baby Earth Crawlers called Sand Crawlers but that a grown adult Earth Crawler are huge. Hawk points out that there is one behind them. Diane tries to hit it with Gideon but it's so slimy that her attack has no effect. Gilthunder and Howzer combine their attacks and Diane even pitches in to no avail. Suddenly, the Earth Crawler begins to freeze over as another person shows up. But when Gilthunder asks who they are the person just flies away. Elizabeth heals Howzer. Diane sees this and wonders if Elizabeth could heal Matrona's children. But before she can ask, Elizabeth senses something and approaches the nearest wall. On the other side, so senses Meliodas. Elizabeth tells them that she can sense Meliodas on the other side of the wall. Meliodas tells Arthur the same thing. They turn around and find a meal has been left for them. It turns out that Ban cooked it for them. Meliodas and Ban are reunited and they punch each other out of love.

Meliodas asks Ban if he's here for the festival. Ban says no that he was just helping Escanor deliver alcohol in Vaziel. Meliodas asks if Escanor is nearby. Ban says yes and that so is Elaine. Meliodas tells Ban that he's happy for him. Ban apologizes for trying to kill him and Meliodas tells him that they must go find everyone and escape the maze. Meliodas tells Ban that he can go look for Elaine but Ban says first he'll help him get to Elizabeth. They decide to create a shortcut through the wall and both of them attack it. They create a hole leading to the other side while Arthur watches in awe.

Retrieved from "https://nanatsu-no-taizai.fandom.com/wiki/Revival_of_The_Commandments_Episode_16?oldid=149051"
Community content is available under CC-BY-SA unless otherwise noted.