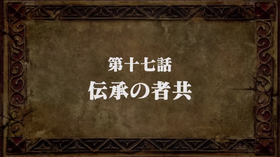 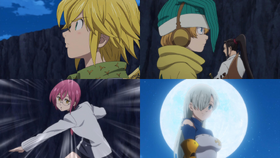 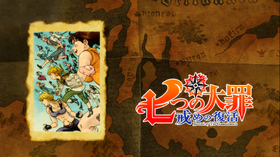 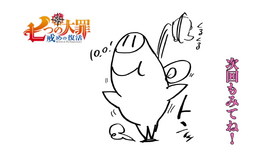 Legendary Figures「伝承の者共 Denshō no Monodomo」 is the seventeenth episode of Season 2 of the The Seven Deadly Sins anime.

The surviving challengers of the Great Fight Festival are split into pairs and made to face each other in a tag team battle.

The group is finally reunited and they made it to the end of the maze. Once they get there, however, Meliodas notices Gloxinia and Drole. He tells them that they are with the Ten Commandments. Gloxinia congratulates those who made it but says that he must kill the ones remaining within the maze. While he uses his magic to do so, King recognizes the attack and realizes that Gloxinia was the first fairy king. He thought Gloxinia had been defeated by the Demon King. Gloxinia tells King that if he wins the tournament he'll tell him whatever he wants to know. They announce the beginning of the tournament but before they can begin Gowther arrives and lands on Escanor. He breaks Escanor's glasses which causes Escanor to break down since they were given to him by Merlin. Gloxinia becomes impatient and impales Escanor with one of his tentacles. Escanor falls to the ground and is on the brink of death before Gloxinia heals him.

Gloxinia has Drole separate the group into teams. The pairings are as follows: Meliodas and Ban, Hendrickson and Griamore, Diane and King, Torah and Jigumo, Estaro and Arbus, Arthur Pendragon and Nanashi, Howzer and Solaseed, Slader and Haifan, Gilthunder and Gilfrost, Hawk and Escanor, Gowther and Jericho, Matrona and Oslo, Silver and Calzzo, and Dolzzo and Quazzo. To make an even number of teams, they also have two substitutes made by themselves: Drole Golem and Gloxinia Servant.

Meliodas and Ban get upset when they realize that Elaine and Elizabeth have also been included in the tournament. Gloxinia says that the moment they stepped inside the maze they were considered participants. Both women reassure Ban and Meliodas that they'll be okay. They go up against two assassin knights but Elaine uses her magic to hold them back. Elaine asks Elizabeth why they came to Vaizel. Elizabeth says that they are on a mission and that they are ready to stop the Ten Commandments. While they are talking, the assassins throws bombs their way that explode into smoke screens. Elizabeth gets grabbed by a serpent and throne aside while Elaine evades her attacker. Elaine uses her magic to pin her attacker down and goes looking for Elaine. Jigumo grabs Torah and cries that he doesn't want him to die. Elizabeth has him step back and she begins to heal Torah. After, Elaine asks Elizabeth why she helped them. Elizabeth explains that Malachia and Kingdom of Liones were allies until the two grandmasters of Liones violated the peace treaty. Jigumo asks Elizabeth who she is and Elizabeth tells him that she's the daughter of Bartra Liones. Elaine asks if she's sure because Jigumo and Torah just tried to murder them. Elizabeth says that she's sure and that she has to help somehow. Elizabeth and Elaine are declared the winners. The losers are sucked out of the arena much to Elizabeth's dismay. Meliodas and Ban breathe a sigh of relief after their fight is over.

They decide to get started on their own match. They go up against Dolzzo and Quazzo. The two demon birds fly around leaving Meliodas wondering how they're going to bring them down. They begin to talk about Elizabeth and Elaine and how they are both soft and smooth. While they're talking they take out the two demons although they don't even realize it. Taizoo calls the match and declares Ban and Meliodas the winners.

The others are fighting their own battles. Diane and King are up against the substitutes. King isn't doing well so Diane picks him up and places her between her boobs to keep him safe. Diane continues to fight but is pulled down by vines. King shows Diane that he's a fairy by transforming but this freaks her out and she throws him away. King stops before the Gloxinia Servant and up close realizes that she looks like Gerheade. He gets captured in vines but uses his magic to get out. Diane is in awe of his magic and asks if he is just a fairy. King reveals to her that he is the current fairy king.

Gloxinia and Drole overhear this. Gloxinia wants to see what he's made of. King uses Form Two Guardian to buy time and to tell Diane how he really feels about her. He doesn't get to however because Diane points out that his stuffed animal is getting torn apart. The Drole Golem tries to pierce Diane's heart but King blocks it. King tells Diane that he'll never let her feel scared again. Diane wonders what exactly happened between the two of them. Gloxinia realizes that he must be the one who defeated the Albion.

Retrieved from "https://nanatsu-no-taizai.fandom.com/wiki/Revival_of_The_Commandments_Episode_17?oldid=118285"
Community content is available under CC-BY-SA unless otherwise noted.