Meliodas vs. The Ten Commandments 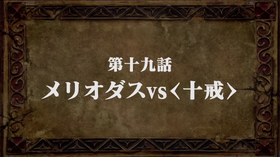 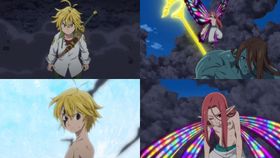 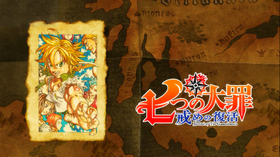 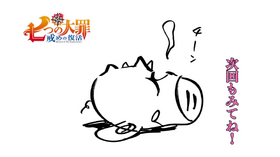 Meliodas vs. The Ten Commandments「メリオダス ｖｓ．〈十戒〉 Meriodasu vs. <Jikkai>」 is the nineteenth episode of Season 2 of the The Seven Deadly Sins anime.

As Escanor's battle with Gowther comes to a dramatic end, Meliodas must now face the remaining Ten Commandments in an all-out battle.

Drole and Gloxinia have been knocked down by Escanor's attack. Diane, who's holding King in her hand, can't believe what just happened. Ban, Matrona, and Jericho all agree that Escanor is completely out of his mind. Ban asks Meliodas what they should do now but he's gone to confront the two members of the Ten Commandments. Drole attacks Meliodas but Meliodas deflects and punches Drole. Meliodas wields Lostvayne and cuts off two of Drole's four arms. Drole says that Meliodas anticipated this. Meliodas admits that he planned this attack because he knew that he'd catch them off-guard. He didn't tell anyone else because he knew that Drole would see through the rouse. Meliodas says that luckily Escanor created the perfect opportunity. Gowther picks up Escanor and asks him why he'd do something like this. Escanor says that they're part of the Seven Deadly Sins and that as allies he couldn't allow Drole and Gloxinia to mess with his heart. Gowther says that he's contradicting himself because he doesn't have a heart. Escanor asks if he's sure about that.

Drole tells Meliodas that he made one fatal mistake. He uses his magic to take everyone else captive by pulling the arena below ground. Drole tells Meliodas that if he resists then he'll kill them. Meliodas attacks him while he's talking and cuts off his other two arms. Meliodas punches him as well but gets shot down by Gloxinia who healed himself. Gloxinia tells Drole that he'll turn this fight around but Meliodas gets up and tells Gloxinia that they don't stand a chance. Gloxinia asks Meliodas if he really wants to fight them to the death. Meliodas says no because he knows why they crossed over to the demon race and how they felt about it. Meliodas reveals the Gloxinia lost something he valued more than his own life and Drole was a warrior who wanted to be the best but his pride was taken from him and ripped to shreds. Gloxinia asks if he knows all that then why do this. Meliodas tells him that once they switched sides it was over. Gloxinia blasts him with magic.

Below, the captives can feel the ramifications of the fight above. Hawk says that they need to help Meliodas. Ban asks how they're going to do that because they won't stand a chance out there. Elizabeth tries to protest but King says that he's right. Right now only Meliodas is the only one with enough power to go against them. Howzer tries to find a way out but the walls won't budge. Gilfrost says that he can try and teleport them. Matrona doesn't want to leave because she needs to win for Sol and Della. Diane tells her that she has an idea and for her to trust her. Gilfrost transports them to the Kingdom of Liones. Meanwhile, Gloxinia heals Drole. Meliodas resurfaces and flies through the sky to Gloxinia. Gloxinia uses her magic to block him but he ripes through the cursed vine tree. Meliodas punches Gloxinia and is about to land a finishing blow when Drole grabs Gloxinia. He uses his earth magic to send Meliodas flying up and then falling. Meliodas cuts Drole but Drole turns his whole body metal. Gloxinia again uses his magic to heal himself and Drole. Meliodas comes flying at Gloxinia but Gloxinia disappears. He isn't fast enough because Meliodas reappears beside him. Meliodas hits Gloxinia and then hits Drole after evading his attack.

Back at the Lioness Castle, the group watch as Meliodas fights Gloxinia and Drole. King says that it looks like Meliodas is holding back and that it seems that he knows the enemy on a personal level. Ban does say that the Ten Commandments see Meliodas as a traitor to the demon race. But that the captain is still the captain. Diane agrees that Meliodas doesn't have a dark hidden side and that he's just like King. Gowther says that the enemy of their enemy is their friend. Elizabeth prays that Meliodas comes back to them. Gloxinia asks Meliodas why he'd take the side of the humans when he has so much potential amongst the demons. Drole says that he could've succeeded the Demon King and claimed the throne. Meliodas is about to attack again when suddenly the other Ten Commandments appear. Howzer points out that Dreyfus is among them. Arthur says that one is missing and Jericho says that Escanor beat Galand. Melascula is also among them. Elizabeth asks Gilfrost to teleport Meliodas away. Gilfrost says that he'd have to be there himself to do it and that the Ten Commandments aren't just going to let him escape.

Meliodas is standing nose to nose with Zeldris. He goes to slash at him with Lostvayne but Zeldris cuts off his arm instead. Meliodas tries to put himself back together but Zeldris prevents him allowing for Grayroad to put a binding spell on him. It disappears and Meliodas tries to escape but gets transported back. The spell has bound him to this location. Hawk is concerned because now Meliodas has to kill the Ten Commandments or they're going to kill him. Derieri attacks Meliodas and they fight each other. She lands multiple attacks and pulverizes both of his arms so that he can't perform Full Counter. Monspeet grabs Meliodas and drops him up in the sky. As he falls, Monspeet attacks. Meliodas survives the attack and slices Monspeet's throat open. Meliodas collapses onto the ground but stands up with his sword in his mouth. Gilthunder tells Gilfrost that he needs to teleport him to where Meliodas is. Gilfrost tells him that he'll die but Gilthunder is okay with that.

Fraudrin approaches Meliodas and tells him that he made a mistake in not killing him. Meliodas beseeches Dreyfus's soul to expel Fraudrin and run away. Surprisingly, Dreyfus hears him but still attacks him with his magic. Gloxinia tells Meliodas that he brought this on himself before firing a spirit spear at him. The smoke clears and Meliodas is still standing but with one less arm. Zeldris tells him that killing him is their first part of revenge. Meliodas suddenly grabs his sword as a cyclone of light surrounds him. He casts his Revenge Counter move but is stopped by Estarossa. Meliodas falls to the ground and Estarossa places a foot on his chest. He tells him that this is going to hurt him as well because he loves him as he smashes his foot into his sternum.

Retrieved from "https://nanatsu-no-taizai.fandom.com/wiki/Revival_of_The_Commandments_Episode_19?oldid=121667"
Community content is available under CC-BY-SA unless otherwise noted.