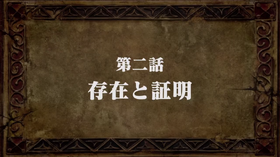 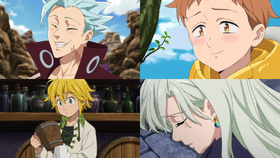 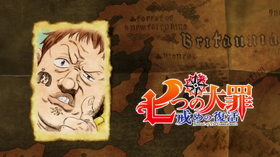 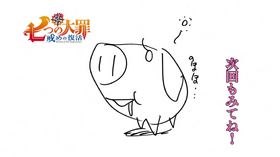 Existence and Proof「存在と証明 Sonzai to Shōmei」 is the second episode of Season 2 of the The Seven Deadly Sins anime.

With Fraudrin's manipulation of Hendrickson, the Ten Commandments return to the physical realm. King follows Ban to the Fairy King's Forest.

Fraudrin stands before the Ten Commandments. He's using Dreyfus' body. Gloxinia asks why they were the only ones who managed to escape. He tells them that he only had so much blood from Elizabeth to break the seal. Galand asks Fraudrin what he's been doing for these past years. Fraudrin tells them that he had a lot of things to sort out and that he's only been self-aware for just ten years. He also mentions that he was up against the Seven Deadly Sins. Zeldris mentions Meliodas. They decide to head to the Kingdom of Edinburgh to rest there once they arrive since the Goddess' seal has depleted most of their powers. Ban and King continue heading to the Fairy King's Forest when they realize that they are being followed by Jericho. Suddenly, a bunch of fog rolls in. Jericho rushes up and grabs Ban's arm. It clears and reveals the Fairy King's Forest. It has regrown and is still alive.

A few fairies are excited because the Fairy King has returned. But when they realize it's King they get upset because they feel like he abandoned them all those years ago. The fairies disperse although one hangs back and tells King about how Elaine intrusted Ban with a Great Tree's seed. That thanks to Ban the forest was revived. Ban says that it was no big deal and the fairies greet him as the Great Fairy King. Ban continues to walk towards Elaine's grave where she lays amongst a bed of flowers. King flys away but Ban picks her up and tells her that he'll find some way to bring her back. the other fairies offer to help and Ban says that they can help by stopping calling him king. That King is their real king. The fairies refuse to believe it.

Elizabeth and Margaret meet Veronica who is saying goodbye to Griamore, Gilthunder, and Howzer. Apparently, they are going on a quest. They're leaving to find evidence to prove that the Dreyfus who hurt Elizabeth was really an imposter. They leave and Veronica asks if Elizabeth has everything squared away with Meliodas. Elizabeth goes to the Boar Hat and asks Meliodas if he's going on another quest. He says yes and she says that she'll go get her things. Meliodas tells her that there is no need. Elizabeth comments that he's acting strangely but then he lifts up her skirt. Hawk saves her. Elizabeth goes to talk to Diane about Meliodas. She mentions how Meliodas is acting strange and Diane asks if she's in love with him. Elizabeth says that she does but she can't tell him. Diane says that she must and Elizabeth asks if something happened. Diane tells her that she finally remembers what happened and that she didn't get a chance to tell King how she feels.

King wanders the forest upset because he didn't have the courage to see Elaine. The other fairies begin to throw rocks at him but Oslo makes them stop by roaring loudly. King believes that they're right. He did abandon them to save the people that he cared about. He's confused because he doesn't know what he is anymore. He isn't a king and he isn't a Seven Deadly Sin since there is peace. He starts to cry and puts Helbram's helmet on. Suddenly, Helbram is standing before him. Apparently, his spirit now resides within the helmet. Helbram tells her that Elaine told him to stick around and for King to protect Ban. Ban tells King that he's leaving the forest to go find a way to bring Elaine back. Jericho tells him that she's going with him since she owes him her life. King continues to follow him but Ban tells him to go back because he has someone waiting for him: Diane. King doesn't believe him but Ban tells him the story of when she said she'd die if he ever left.

Diane tells Elizabeth that she's going to tell King that she loves him. Elizabeth is envious because their feelings are mutual. Diane tells Elizabeth to just tell Meliodas how she feels. Elizabeth tells her that it's okay because he already has someone: Liz. Gowther gets pills from Merlin but doesn't take them. Meliodas tells him that they're going to be leaving tomorrow or the day after. Gowther says he isn't going and leaves to go meet up with Guila. Meliodas goes inside to talk with Merlin. Meliodas asks for her to return something that she stole from him ten years ago. He tells her that the demon's seal has been broken. Merlin hypothesizes that Hendrickson may be still alive. Diane and Elizabeth run up to Guila and Gowther with Zeal, Guila's brother, but Guila doesn't remember having a brother. She points at Gowther and says that he's the only family that she has. Gowther reveals that he manipulated Guila's memories because he is studying love. Diane tells him that he can't just replace Guila's memories, that her memories of her brother are precious.

Diane tells Elizabeth to go get Meliodas and Merlin. Gowther uses a spell to knock out any person with low spirits. Gowther believes that memories are just information, easily deleted and replaced. Diane tells him that they aren't. Gowther goes to attack her but Diane sends spikes of Earth at him.

Retrieved from "https://nanatsu-no-taizai.fandom.com/wiki/Revival_of_The_Commandments_Episode_2?oldid=115119"
Community content is available under CC-BY-SA unless otherwise noted.