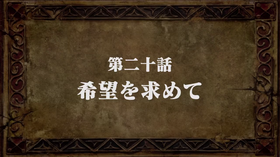 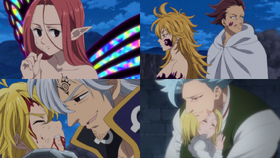 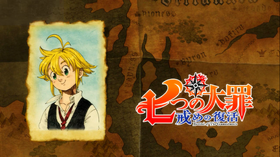 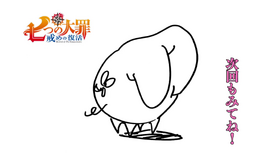 Have Hope「希望を求めて Kibō wo Motomete」 is the twentieth episode of Season 2 of the The Seven Deadly Sins anime.

With Meliodas rendered powerless, Ban asks to be transported back so he can aid him in his fight against Estarossa and this other Ten Commandments.

Estarossa continues to smash his foot into Meliodas chest as he screams. Melascula asks Gloxinia to heal her because she was burned by fire. Monspeet says that he sensed someone watching them and Drole goes to check the arena. They find that everyone has disappeared. Estarossa asks Meliodas if he's going to betray the Seven Deadly Sins like he betrayed them. He reveals that Meliodas used to be the sworn leader of the Ten Commandments. Estarossa says that Meliodas was supposed to be the next demon king. He says that Meliodas used to be his childhood idol until he betrayed them. He continues on to say that the Goddess Clan then encouraged the other races to get rid of them. He claims that it was Meliodas who started that war 3000 years ago. Estarossa tells him that he has a new group to betray and that he is vile. Meliodas whispers that he's sorry to Elizabeth. Melascula asks to be the one to kill Meliodas since they did a number on her. Jericho tells the group at the Liones castle that Melascula is going to eat Meliodas's soul. Elizabeth asks if there's anything they can do. Jericho says maybe and looks to Ban. Ban is hugging Elaine and then asks Gilfrost to send him over to Meliodas. Melascula begins her chant to pull Meliodas's soul from his body but he's resisting.

Ban shows up but uses his magic to slink past the Ten Commandments. He grabs Melascula by the head and breaks her neck. He then uses his magic to slash her up forcing all of her hearts to fall from her body. Ban steps on each one of them. Estarossa thanks Ban for killing her since she tried to consume Meliodas's soul without his permission. Ban tells Meliodas that he's in no shape to take on Estarossa. He offers to take him on but Estarossa gets past him and stabs Meliodas in the heart. He tells Ban that demons have seven hearts and that if each one is destroyed the demon is dead. He uses various knives to stab Meliodas despite Ban trying to stop him. He stabs the seventh one and Meliodas dies. Ban continues to try to hurt Estarossa but Estarossa makes him explode. Estarossa declares Meliodas dead and that Britannia is now theirs. Everyone at Liones castle is crying over Meliodas's death. Elizabeth asks Gilfrost to transport her to Meliodas.

Elizabeth searches for Meliodas. She finds his body and holds him in her arms as she cries. Later, Elizabeth heals Sol and Della. Matrona thanks Elizabeth. King wonders how the others are doing. Apparently, they all went their separate ways trying to stop the demon race invasion. Matrona believes that it'll be a struggle for them since the demon race is vast in numbers. King invites them to stay with him in the Fairy King's Forest. Matrona says that it's their best option for the moment. Diane asks what Elizabeth thinks. Elizabeth says that she'd prefer to stay and help her people. Arthur takes down a Grey Demon with the help of Nanashi. Nanashi tells him that as long as he has that monster cat by his side he'll never die. Suddenly, demon reinforcements arrive forcing Nanashi, Arthur, and their men to run away. Gilthunder and Howzer fight other Grey Demons. Ban and Slader run towards the fight. Ban remembers how Jericho told him that Elaine was gone. Ban tells her it's okay that he killed Melascula and cut off the magical power that was keeping her alive. Ban says that they made that decision together.

Ban asks a fallen soldier what happened to the guards of the northern village. The soldier tells him that the villagers offered Holy Knights as sacrifices to Fraudrin. One Holy Knight managed to escape and made it to the Forest of White Dreams. There Golgius ran into Hawk Mama and was picked up and taken into the Boar Hat. He walks downstairs and sees Elizabeth serving some customers ale. He recognizes who she is.

Retrieved from "https://nanatsu-no-taizai.fandom.com/wiki/Revival_of_The_Commandments_Episode_20?oldid=133404"
Community content is available under CC-BY-SA unless otherwise noted.