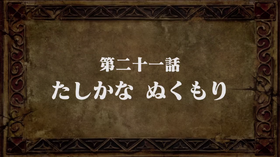 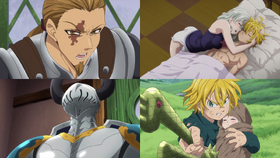 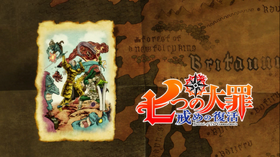 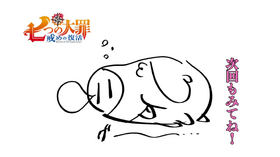 Certain Warmth「たしかなぬくもり Tashika na Nukumori」 is the twenty-first episode of Season 2 of the The Seven Deadly Sins anime.

While caring for Meliodas, Elizabeth encounters a former Great Holy Knight thought to have perished long ago by the hands of Dreyfus and Hendrickson.

Hawk notices that Golgius has woken up. Golgius wants to leave before they recognize him but his stomach growls. Elizabeth serves him a bowl of soup. Hawk goes to ask him a question and reveals that they know who he is. Golgius becomes on guard and asks why they helped him since he's their enemy. Elizabeth says that that's just what they do. Golgius says that she's too sentimental and leaves. Elizabeth goes to see Meliodas in his room and begs for him to come back to her because she can't live in a world without him. Hawk is downstairs cleaning when a Holy Knights arrives. Elizabeth comes down to see what the fuss is about and learns that its the same knight from the Vaizel Fight Festival. He removes his helmet and reveals himself to be Zaratras. Hawk asks if it's the same Zaratras that Hendrickson and Dreyfus squared ten years ago. Zaratras says the very same and reveals that his downfall was because he ate a fish pie that Hendrickson had offered him. Zaratras is upset that he ever ate that pie or else he'd have been there for Hendrickson and Dreyfus and saved them from the darkness.

Elizabeth serves him some tea and Zaratras reveals that he's been resurrected by Melascula, at least for the time being. Elizabeth believes that if he's still alive then maybe Elaine is too. Hawk asks if he's returned to get back at Hendrickson and Dreyfus but Zaratras says that his one regret is that he didn't see that they were being controlled by a demon. Elizabeth asks if Gilthunder knows that Zaratras has returned. Zaratras says that he doesn't know what he'd say to him. Plus he wasn't his favorite as that spot belonged to Meliodas. He asks that Elizabeth take him to see Meliodas so he can give him a piece of his mind. Elizabeth takes him to see Meliodas and he comments that she's healed him perfectly. She says that she has but that still none of his hearts are beating. She asks Sir Zaratras what she should do. Zaratras says to ask Meliodas directly. He draws a bunch of symbols on Meliodas's body and the three of them surround his body. Zaratras takes their hands and transports them to a field outside of Kingdom of Danafor.

Zaratras says that they're in a memory and that nobody will be able to see or hear them. Elizabeth spots her father, Bartra Liones, and a young Zaratras. Zaratras says that this is where they first met: he, Meliodas, and Elizabeth. Elizabeth says she's never been here but then the young Zaratras points in the distance. We see Meliodas walking towards them holding a bundle in his arms. That bundle is a baby Elizabeth. Young Zaratras tries to take the baby from Meliodas but Meliodas tells him to not touch his woman. The memory fades into another one where Zaratras is sitting at a table and Meliodas is standing nearby. Zaratras explains to Meliodas Bartra's foreshadowing power and that he wants to adopt Elizabeth. Meliodas says okay but that in exchange he wants to become a Holy Knight. Zaratras laughs but then Meliodas pins him to the ground with his sword. He concedes and Meliodas is appointed a Holy Knight to the royal family, well, to Elizabeth anyway.

Zaratras says that after that Bartra saw that the Kingdom of Liones was to be under the protection of seven sinners. Merlin shows up and says that the king's omen is true and that she's already gone through the selection process. Meliodas says that they should gather everybody right away because the Seven Deadly Sins will beat the Ten Commandments. Elizabeth asks if that was the plan all along and Zaratras says yes. The memory shifts again to a moment when Meliodas and Zaratras are sharing a drink. Zaratras passes out after one glass. Meliodas mentions something about a curse and how it prevents him from dying. The memory shifts again showing Meliodas comforting a young Elizabeth. Young Elizabeth asks if he's going to come back to her. Meliodas tells her that he'll always come back to her alive. The three of them return to the Boar Hat. Zaratras asks if Elizabeth is alright. She says that she's fine because Meliodas is definitely coming back since he made a promise to her.

Meanwhile, in Purgatory, Meliodas goes up against the Demon King. In Liones, the Ten Commandments have arrived. Denzel arrives and tells Bartra that he's dispatched his own troops and that the castle will be safe. Jericho comforts Zeal and tells him that Ban will protect them. Outside, Ban, Gilthunder, Howzer, Slader, and other Holy Knights face off against Estarossa. They've lost their strength because when someone with hatred in their heart stands before Estarossa they lose the ability to cause harm. Escanor easily walks up towards Estarossa because he doesn't feel any hatred towards him only pity.

Retrieved from "https://nanatsu-no-taizai.fandom.com/wiki/Revival_of_The_Commandments_Episode_21?oldid=149039"
Community content is available under CC-BY-SA unless otherwise noted.