Return of the Sins 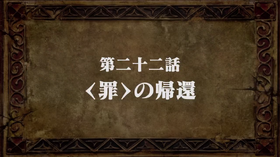 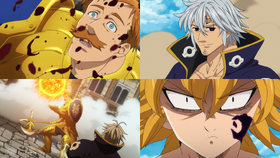 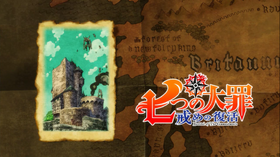 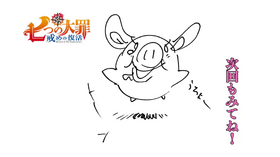 Return of the Sins「〈罪〉の帰還 Tsumi no Kikan」 is the twenty-second episode of Season 2 of the The Seven Deadly Sins anime.

With Ban and the Holy Knights paralyzed by Estarossa's powers, Escanor shows up to thwart the fall of Liones at the hands of the Ten Commandments.

A group of Holy Knights tries to escape from Fraudrin and Zeldris but are turned into Zeldris's slaves after having turned their back on him. Suddenly, they feel a pulse of power that's come from the castle. Escanor stands in front of Estarossa while the others watch. Howzer asks why he's the only one able to move and Gilthunder says it's because he's the most powerful of the Seven Deadly Sins. Estarossa attacks Escanor and it seems like Escanor isn't a match for him. However, Escanor hits Estarossa with one punch and sends him to his knees. Estarossa says that he doesn't have to hold back with Escanor as he summons a sword. Escanor says that he won't either as he charges up his power. Estarossa says that if he uses that type of power he'll destroy all the people behind him when Estarossa deflects it. Escanor asks Ban if Lake Penace is located just outside of Liones. Ban says yes before Escanor hits Estarossa towards it. He uses his power and slams him down into the water. Estarossa hits the bottom when Escanor sends another attack, completely drying out the lake. Escanor approaches Estarossa who survived the attack. Escanor goes to finish him off but Estarossa uses Full Counter and sends Escanor's attack back at him.

Suddenly, Estarossa stumbles back because Escanor has landed a hit. Escanor holds up his sun and aims it at Estarossa. Zeldris tries to come and help him but Escanor puts a lot of force behind the attack. The two of them go flying and explode in the distance. Monspeet says that Estarossa and Zeldris's powers instantly vanished in the distance. Howzer and Gilthunder along with the others remove their armor because its useless thanks to Escanor's heat. Howzer says that they should retreat to the castle but Gilthunder is angry because he thinks that he's giving up. Howzer says that they can't do anything out here but that they can still protect the King and the princesses. Slader says that he'll help round up other Holy Knights and civilians and lead them to safety. A group of them walks by but begin to attack Gilthunder and the others. They are the same Holy Knights that became Zeldris's slaves. Monspeet and Derieri appear and tells them to give up because they have no chance at winning. Denzel walks out of the castle with Deathpierce and says that he'll kill them right here.

Monspeet doesn't think that he's a threat to them. Denzel says that he isn't the one that's going to kill them. He summons one of the Goddess Clan and offers up his life in exchange for the use of his body as a place to manifest. The goddess inhabiting Denzel's body is known as Nerobasta. Nerobasta asks what they'd have her do. She notices Derieri and Deathpierce asks her to stand and face off against the demons because they are too powerful for them. She declines to help and grows wings before flying off. As she leaves, she comes across a Red and Grey Demon. She destroys them because they are in her way. Derieri flys up to go after her but Nerobasta surrounds her in light. It looks like Derieri is done for but she breaks out of the light. Nerobasta tries to reason with Derieri but Derieri swipes at her and cuts her in half. Monspeet tells her that that could've gone differently if it'd been one of the Archangels.

Inside the castle, Bartra says that he heard a noise outside but that it's gone silent. Gilthunder and the others come rushing in. Gilthunder asks that they leave because the citizens and Holy Knights are under the Ten Commandments spell. Deldry says that Denzel just went out there and had a secret strategy. Deathpierce says that he did but that Denzel was killed. Fraudrin appears above them and says that he'll see to it that they follow him. Grayroad invades the home where Jericho and Zeal are hiding. Monspeet helps to fix Derieri's hair after Nerobasta's attack had cut it off. Elizabeth, Zaratras, and Hawk make their way to Liones. Zaratras says that he's against taking Elizabeth into the heart of all this danger. Elizabeth says that she made a promise and that she isn't going to let the people of this kingdom down. Zaratras finally agrees but tells her to not let her guard down around the Ten Commandments.

Suddenly, a red demon appears alongside them. Zaratras uses Purge and the demon falls to the ground. A flock of red and grey demons approaches. Zaratras tells Hawk Mama to turn but Hawk Mama instead just barges through the demons destroying them into pieces. Hawk eats one and turns into a demon piglet. Elizabeth tries to get her to spit it out when Derieri and Monspeet appear floating above. Derieri recognizes Elizabeth and lands in front of her. Zaratras tries to get between them but Derieri pushes him away. She goes to hit him when Elizabeth uses her magic to stop her hand. Derieri's hand explodes and Derieri says that she knew she was back. Derieri raises her claw to kill her but gets punched in the gut. She falls from Hawk Mama with Monspeet flying after her. Elizabeth looks up and finds Meliodas holding her. He apologizes for having kept her waiting but Elizabeth hugs him and tells him that it's okay.

Retrieved from "https://nanatsu-no-taizai.fandom.com/wiki/Revival_of_The_Commandments_Episode_22?oldid=125666"
Community content is available under CC-BY-SA unless otherwise noted.