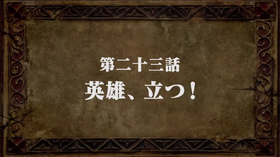 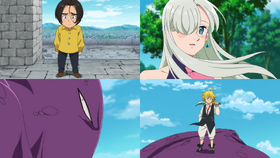 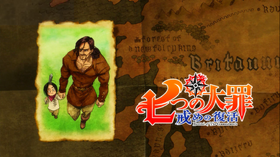 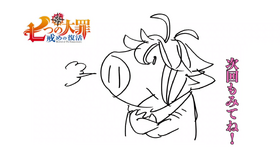 The Hero Rises!!「英雄 立つ！！ Eiyū Tatsu!!」 is the twenty-third episode of Season 2 of the The Seven Deadly Sins anime.

As the situation inside Liones Castle becomes even more dire, Merlin, freed from Galand's Commandments of Truth, reappears in her former form.

Elizabeth tells Meliodas that she knows about their past and that it all makes sense to her. She thanks Meliodas and welcomes him back. She asks if he's alright though and Meliodas says that he's all back to normal. He also comments on her new outfit and does an "inspection." Elizabeth grabs him and holds him to her chest telling him to touch her more. After a moment she freaks out and tells him that she didn't mean it in a weird way. Zaratras coughs and Meliodas says that he's surprised that they're both alive to meet again in this world. Zaratras and Meliodas are talking when Hawk flies out of the Boar Hat with Lostvayne. Suddenly, Derieri reappears and punches Hawk Mama. Hawk Mama falls over crushing the Boar Hat. Meliodas and Elizabeth along with Zaratras jump from Hawk Mama's back and land on the ground. Hawk goes flying towards Derieri but Derieri kicks her out of the way. Meliodas grabs Derieri by the neck and throws her down onto the ground. He slams his elbow into her stomach and then jumps back. Derieri calls him a traitor and continue to slash and grab at him. Meliodas says that he'd rather not kill her just as Monspeet appears and sends a wave of magic towards them. Meliodas throws Derieri towards Monspeet and uses Full Counter to send the attack back towards them, seemingly disintegrating them.

Hendrickson arrives in Liones castle to fight Fraudrin. He tells him that today is the day that Fraudrin will be returning Dreyfus' body to him. Gilthunder tells Howzer and Slader to focus on protecting the royal family. Princess Veronica gasps and behind Fraudrin appears Grayroad with Jericho and Zeal as her captives. Fraudrin says that Grayroad has turned them into her young and they will now protect their Queen. Arden frees two of the captives but they morph into Red and Grey Demons. Ban attempts to use his magic on them but doesn't manage to grab anything. Dogedo decides to smash them but after he does he ages rapidly and falls to the ground. It's because Grayroad is the Commandment of Pacifism. Anyone who commits murder before her will have all their time taken from them. Fraudrin says that they can either die killing the demons as they hatch or be killed by the demons after. Margaret tells Gilthunder that she isn't afraid of death just so long as she's with him. Gilfrost says that he won't let Gilthhunder die and reaveals himself to be Vivian in disguise. She teleports them out of the castle. Gustav uses the last of his energy to freeze both Jericho and Zeal so that they don't hatch. It only lasts for a moment before the ice starts to melt.

Luckily, Merlin appears and freezes the eggs. She also destroys one of Grayroad's monsters. Everyone waits for her to die but she doesn't. She tells them that she stopped her own time which is why it had no effect on her. Grayroad asks how she escaped Galand's commandment and Merlin reveals that she's the daughter of Belialuin. This freaks out both Grayroad and Fraudrin. Grayroad tries to escape but Merlin manages to capture it inside a glass vile. Fraudrin disappears. Howzer and Ban decide to go after him. Veronica asks abut Griamore. Fraudrin lands elsewhere but was followed by Hendrickson. Hendrickson tries to purge Fraudrin from Dreyfus but it doesn't work. He gets knocked down and Fraudrin is about to kill him when Zaratras appears and offers to lend a hand. Hendrickson asks how he could possibly be here but Zaratras says that right now they have to focus on saving Dreyfus. The two of them attack Dreyfus in tandem. Zaratras says that the only way he can think of to save Dreyfus is death. This shocks Hendrickson giving Fraudrin an opening to attack. Zaratras grabs Hendrickson and dodges the attack.

Hawk falls from the tower and Fraudrin goes to see what it is. Zaratras uses this distraction to grab Fraudrin from behind. Zaratras offers up the rest of his life force in order to free Dreyfus. There is a bright light which Griamore witnesses before both Dreyfus and Zaratras fall to the ground. Standing before them is Fraudrin in his true form. Hendrickson attacks him but Fraudrin impales him through the shoulder. Griamore shows up and calls for his father. Fraudrin looks over and that's just enough for the real Dreyfus to create a hole in Fraudrin's chest. He uses a second attack to destroy him. A cloud of dust wells up just as Griamore runs to Dreyfus and hugs him. Dreyfus is confused because Griamore is a child once again but Hendrickson tells him that he'll tell him all about it. They embrace. From the ground, Zaratras admits that Dreyfus is a powerful knight and that he should've had him take over for him sooner. Dreyfus kneels beside Zaratras and holds him in his arms. Both Hendrickson and Dreyfus are regretful about what they did in the past. Zaratras hits both of them and tells them to take responsbility as adults or else he'll never move on. Zaratras begins to slowly fade away but as he does he tells them to tell Gilthunder that he'll always be watching over him.

Suddenly, both Hendrickson and Dreyfus hear Fraudrin's voice and as the smoke clears it reveals that Fraudrin isn't dead. He's in his true form, using his unique power Full Size to become gigantic. He raises a massive claw and brings it down to crush both Dreyfus and Hendrickson. Hendrickson kicks Dreyfus and Griamore out of the way. The claw smashes down but when it lifts up there is nothing beneath it. Luckily, Merlin had arrived just in time to save Hendrickson. Ban, Howzer, and Veronica arrive shortly after and cringe at the sight of Fraudrin. Fraudrin says that he'll crush them all but before he can Meliodas arrives and starts to beat him up. Everyone is shocked that Meliodas is alive. Fraudrin and Meliodas fight each other and are evenly matched. Merlin notices that something is off and then realizes that Meliodas is using a clone. The real Meliodas shows up much to Fraudrin's shock. His power level is now at 60,000. But the others realize that something about him has changed as his eyes go black and a symbol appears on his face.

Retrieved from "https://nanatsu-no-taizai.fandom.com/wiki/Revival_of_The_Commandments_Episode_23?oldid=150424"
Community content is available under CC-BY-SA unless otherwise noted.