So Long As You're Here 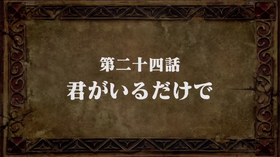 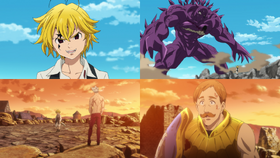 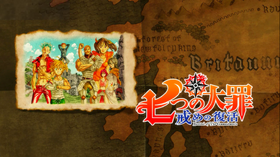 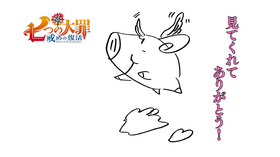 So Long As You're Here「君がいるだけで Kimi ga Iru Dake de」 is the twenty-fourth and last episode of Season 2 of the The Seven Deadly Sins anime.

Meliodas tells Fraudrin that they should end this. Fraudrin goes to attack him but Meliodas rips through his chest and continues to punch holes through him. Howzer says that he just took down that commandment like it was nothing. Merlin says of course because his power level is double than that of Fraudrin's. Fraudrin tells Meliodas that he's been waiting to get revenge over the goddess race and him for 3,000 years. Meliodas hits him on the face and says that it was the same for him to before sending him flying. Ban says that this isn't the way the captain usually does things. Fraudrin recall when, 3,000 years ago, Gowther told him about how Meliodas betrayed them. That he abandoned them to go fight for the one he loves. Gowther asks Fraudrin if he can understand that and Fraudrin says no. In the present, Fraudrin tells Meliodas that he is a member of the Ten Commandments. Meliodas tells him that he isn't that he's only a substitute. Fraudrin wonders just how long Meliodas will keep that mocking smile. Howzer asks what Fraudrin is doing and Merlin says that he's opted for self-destruction. She encases them in a perfect cube for their protection. Fraudrin says that even if he can't kill Meliodas he'll still wipe the Kingdom of Liones off the map. Jericho mourns the loss of her brother while Guila tells Zeal to hold on. Ban asks Merlin if provoking Fraudrin is part of Meliodas's strategy.

Fraudrin tells Dreyfus that they're going to be in the next world together as well. Dreyfus tells Griamore that he'll be with him until the very end. Fraudrin begins to remember how for all those years he pretended to be Griamore's father. Griamore breaks away from Dreyfus and runs to Fraudrin. He hugs him and tells him to stop what he's doing as he creates a barrier around the two of them. Fraudrin tells Griamore to get away but he continues to think about his memories with Griamore. Finally, Fraudrin stands down and promises Griamore that he won't hurt anyone else. Griamore runs back to Dreyfus. Fraudrin tells Meliodas that he finally understands and to kill him. Griamore says no but Meliodas punches Fraudrin and destroys the upper half of his body. Elizabeth shows up and looks at Meliodas from a distance.

Meanwhile, Hawk returns to normal after pooping. Then, he remembers what happened to Hawk Mama and starts to cry. Luckily, Hawk Mama is safe and sound and nearby and is able to comfort Hawk. Escanor approaches Merlin. He tells her that he heard that she'd been turned to stone but that he knew she'd overcome it. He asks her whats wrong when he turns to look at Ban and Meliodas. Meliodas asks Ban if he has something to say. Ban tells him that he's glad that he's alive and well and that they should have a few drinks to celebrate. Escanor asks what happened because he saw Meliodas pass away. Merlin explains that everytime Meliodas dies he's resurrected due to a curse placed on him by the demon king. Escanor says that's incredible. Merlin says that the problem is that each time he's brought back his emotions vanish and he regresses back to when he was known as the most feared demon as all. Escanor goes to talk to Meliodas but Merlin tells him to let him be. Merlin believes that Fraudrin was behind countless tragedies but that wasn't the way to defeat him.

Later, the group attends the funeral of many Holy Knights including those of Dogedo, Denzel, Marmas and Gustaf. Deldry is so upset that she begins to throw rocks at Hendrickson and Dreyfus. Bartra tells them that they must put the past behind them and stand together as one. Meliodas goes to the destroyed Boar Hat and camps out. He has a toast with himself for finally getting revenge for Liz. Elizabeth shows up and they share a meal. Meliodas tells her that he can't even look Ban in the eye and that something is different about him. He says that he's afraid of going back to being who he once was but that he has to if he wants to save her. Elizabeth hugs him and tells him that everything is going to be okay.

The next day, Howzer wakes up and go to help rebuild Liones but finds that the town has been restored once he goes outside. Merlin apparently spent the whole night rebuilding everything. While taking a bath and being pampered by Escanor, Merlin says that it won't fully make things whole again because it won't bring back the dead or heal the souls of this kingdom. She tells Meliodas that it isn't bad to celebrate a win. Ban grabs Meliodas and puts him in a headlock. He apologizes for yesterday because he didn't know what to say to him after the battle. He says that nothing would change between him and Meliodas. Meliodas says that he didn't do anything wrong. Ban agrees and Meliodas hits him into a wall after telling him to shut up. Escanor performs a poem and tells Meliodas that he understands what he's going through since he's under a curse as well. he asks that he cheer up. Meliodas tells both Escanor and Ban thank you.

Hendrickson and Dreyfus are walking through Liones. Hendrickson says that he understands Griamore will soon return to normal. Dreyfus says that that's what Merlin says. Hendrickson asks what's the cure and Dreyfus says that it's a kiss from the one that he loves. At the same moment, Griamore is with Veronica and she gives him a kiss on the forehead. He transforms back into his grown-up self. Guila walks into the room after having heard Veronica scream and blasts him out of the room. Back at the Boar Hat, the Sins have gathered. Hawk is excited because the food is amazing. Ban says that the drinks will be amazing too now that Escanor is here. Escanor asks Merlin if she's going to fix up the Boar Hat and she says no. Meliodas agrees that they have to fix it up themselves.

Merlin says that they have to plan their next move. A large number of civilians and Holy Knights stricken by the Ten Commandments have gone South. Merlin says that their next stronghold is the Kingdom of Camelot. Elizabeth is sad for Arthur but Meliodas says that he isn't going down without a fight. Ban says that Elaine is still alive which means Melascula isn't dead yet. Merlin points out that neither is Zeldris, Gloxinia, Drole or Estarossa. Each of these demons still pose a threat but if they rush into battle they'll be sure to be defeated. Escanor points out that they have already lost quite a few warriors. Merlin agrees.

Jericho slashes at the water with her sword still upset over Gustaf's death. Suddenly, the water freezes and she realizes that she has the same power that he had. She promises to become a better knight then Gustaf.

Diane and King hang out with Matrona and her family in the Fairy King's Forest. Meliodas promises that the next time they'll be able to bring all of the Seven Deadly Sins together. Elizabeth promises to be on Meliodas side forever and ever until the end of time.

Retrieved from "https://nanatsu-no-taizai.fandom.com/wiki/Revival_of_The_Commandments_Episode_24?oldid=131964"
Community content is available under CC-BY-SA unless otherwise noted.