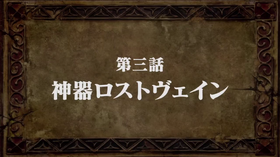 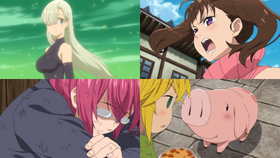 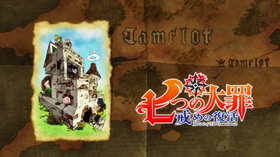 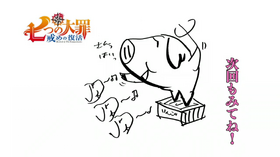 Sacred Treasure Lostvayne「神器ロストヴェイン Jingi Rosutovein」 is the third episode of Season 2 of the The Seven Deadly Sins anime.

Diane confronts Gowther after he manipulates Guila and Zeal's memories. With the return of the Demon Clan, new threats descend upon allied clans.

Elizabeth is dreaming of looking for Meliodas when the real Meliodas wakes her up. She asks how she got here and Meliodas explains how Gowther made everyone in the kingdom black out all at once. Meanwhile, Diane and Gowther continue to fight each other. Diane finally has enough and punches Gowther while telling him to snap out of it. Meliodas shows up after the fight and finds both Diane and Gowther sitting on the ground. Meliodas asks Gowther if he knows what he's done. Gowther tells them to lock him up before he stops being himself. Meliodas tells Merlin that they can finish their talk later. The Ten Commandments are staring down into a pit that is 30,000 feet deep. Zeldris knows that Meliodas did this. He wonders what he could've been doing out here. Melascula tells Zeldris to relax and enjoy themselves since they haven't been here in years. Zeldris asks Estarossa what he thinks.

Gowther returns Guila and Zeal memories. Gowther apologizes and Guila thanks him for giving back the memories of her father to her. She tells him goodbye before she and Zeal leave. Gowther sighs because he got dumped. Slader appears and Merlin tells him that she has a favor to ask of him. She turns to Gowther and uses her magic on him. He shrinks until she's able to pick him up. She reveals that Gowther is actually a doll created by a great magician. She asks Slader to look after him while they are away on a mission. Slader agrees. Back at the Boar Hat, Diane asks Meliodas if he knew that Gowther was a doll. He says no that he just found out today. Diane clutches her head as her eyes flash purple but nobody else notices. Meliodas asks Slader if he can stick around for a while since they're missing two of their guys now. Slader accepts and Elizabeth takes this time to ask if she can come to. Meliodas says that there is no reason to put herself in danger. Elizabeth yells at him and says that she thought they were in this together.

She asks if she's just baggage that is weighing him down. Meliodas says that's right and Elizabeth runs out of the room. Hawk and Diane beat up Meliodas for saying that. Outside, Slader talks to Elizabeth. She tells him that she knows Meliodas is just concerned for her but that she wants to prove that she can help too. Slader suggests that she show him that she can by the actions that she takes. They go back inside and Merlin tells them that they are going to the Kingdom of Camelot. Merlin teleports the Boar Hat to right to the air above Camelot. A giant golem stands before the kingdom and watches as it approaches. Meliodas says it's an Albion, a great beast that was created by the Demon Clan. He believes that it woke up when the Ten Commandments were brought back. The golem senses their power and attacks them but misses. Instead, he hits the barrier that Merlin has put around the city. Merlin thinks that it'll only last being hit two more times.

The golem hits it twice and the barrier disappears. Arthur Pendragon directs his Holy Knights to attack the golem. They survive the first blast but the second blast is too big so Arthur tells them to take cover. Meliodas has Merlin send him down there and he uses his reflective magic to send the attack back to the golem. Merlin flys the Boar's Hat around the golem creating an opportunity for Meliodas to climb up the golem. Arthur and the Holy Knights follow. Arthur gets caught by the golem but Meliodas frees him. In the process, he breaks his sword. Meliodas is amazed that it last this long. Merlin decides at this time to return his sacred treasure: Lostvayne. Meliodas uses the sword to cut off one of the golem's arms. The golem begins to mutate and creates five canons that extend out of its body. Meliodas uses his weapon special ability to make copies of himself as the golem prepares to attack. Once it attacks, all five Meliodas's use Full Counter to send it back to the golem again.

The attack destroys the upper part of the golem. King tells Oslo to create a portal to the Kingdom of Liones and asks Jericho if she's gonna come with him. Jericho tells him to leave her alone. That she isn't a Holy Knight anymore and is tired of living with her brother. Suddenly, the forest starts to grow. King wonders how because the Fountain of Youth no longer exists. Ende tells King that a man comes once every few years to replenish the forest. King realizes that this man is Ban. Ban pours out his blood before Elaine's altar. A fairy thanks him because the forest will soon be restored. Ban asks if she were the ruler of this place wouldn't that make the other fairies happy. The fairy tells him that it doesn't work that way, that the Fairy King is chosen by the sacred tree. Ban says that he isn't qualified. The fairy knows this and tells him that King should be leading them.

The ground starts to shake and King thinks that the forest is going to grow again. In reality, another Albion has appeared outside of the forest.

Retrieved from "https://nanatsu-no-taizai.fandom.com/wiki/Revival_of_The_Commandments_Episode_3?oldid=149043"
Community content is available under CC-BY-SA unless otherwise noted.