The Ten Commandments on the Move 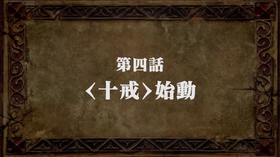 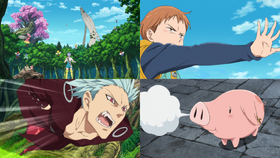 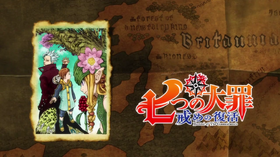 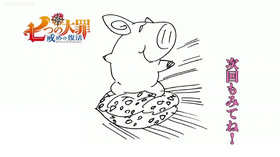 The Ten Commandments on the Move「〈十戒〉始動 <Jikkai> Shidō」 is the fourth episode of Season 2 of the The Seven Deadly Sins anime.

King struggles to fend off the giant Albion sent to destroy the Fairy King's Forest. Galand of the Ten Commandments appears before Meliodas.

Hendrickson struggles to walk through the forest. He must return to the Kingdom of Liones to warn them about the Ten Commandments before they return to full strength. Hendrickson collapses onto the ground and vows to bring back the real Dreyfus one day. The Albion continues to walk towards the Fairy King's Forest. Jericho can't believe how tall the Albion is, it's bigger than the Sacred Tree. The fairies try to stop it but the Albion continues to attack. Jericho runs to tell Ban about what's happening. Suddenly, the Sunflower that blooms on the Sacred Tree begins to fire at the Albion's face. The fairies look and find King hovering above the sunflower with his arm outstretched. The Albion fires a laser beam at the sunflower but King retaliates with his own. The two beams meet in the middle but the Albion's is stronger and knocks King down. The other fairies watch as King stands up and wonder why he's helping them since they were so mean to him. King tells the Albion that he isn't going to let him destroy his homeland.

Jericho runs into the tunnel to tell Ban but finds the way blocked. Ban tells Gerheade that he understands why they must hate him because of what the humans had planned to do with their forest. The fairy surprisingly tells him that she's grateful to him because he resurrected this place all on his own. But she goes on to tell him that the only person who can be king is King. She attacks Ban but Ban evades her attacks while telling her that he has no interest in being king. Ban tells Gerheade that he plans on leaving the forest. She doesn't accept that and attacks Elaine's body. Meanwhile, Jericho tries to bring down the barrier but has had no luck so far. She pulls her sword from its sheath and begins to cut the vines. Finally, she's able to make it through. She finds Ban impaled and hanging above Elaine. Gerheade says that he'll remain here forever as the forests new fountain of youth. Jericho tries to wake up Ban while the tiny fairy that accompanied Jericho tells Gerheade what's going on outside.

Gerheade flys outside and can't believe that she's seeing an Albion since they've supposedly been sealed away for the past 3,000 years. King continues to battle the Albion. He swears that he won't let that thing defeat him because he has to return to Diane. The Albion strikes and King falls from the sky. Gerheade tells him that she'll help him but just as she does the Albion strikes the Sacred Tree, cutting it in half. The other fairies decide to join in on the attack. They tell King to get away and to safety because they'll take care of it. King isn't sure but Gerheade pulls him away against his will. She tells him that he has to survive because they don't know what will happen if the Fairy King dies. Helbram appears and tells King the same thing. King sheds a tear but stops and raises his hand to try one more time. He starts to glow and creates a large spear. He throws it at the Albion and it explodes. King is unconscious after having used so much power and floats in the air as the Albion dissipates.

Fraudrin tells Zeldris that two of their Albion have been destroyed. Galand can't believe that there are still people who defy the Demon Clan. Melascula asks Galand if he's really going to go out there with his magic depleted. Galand says he sees it as a warm-up. Zeldris tells him that it's that type of arrogance that got them sealed away in the first place. Gloxinia gives Galand some advice on where to go before he shoots up into the sky. Meliodas explains to Arthur Pendragon about how the Ten Commandments have been released and that that's why the Albion appeared. Diane wonders if they'll stand a chance going up against the Ten Commandments. Slader says that Hendrickson was easy in comparison. He asks for Gowther's opinion and Diane's eyes glow purple. She rubs at her head because it suddenly felt fuzzy. Hawk says that as long as they have Meliodas's attack move they should be able to take anybody down.

Meliodas demonstrates his new attack by creating multiple clones. They all fondle Elizabeth and after are beat up by Diane and Slader. Merlin says that there is no other sacred treasure fit for Meliodas besides Lostvayne. Elizabeth is upset because Meliodas doesn't need her at all and there is nothing she can do about it. Suddenly, there is a sound like thunder and then something lands before them. Dust clouds the air as Meliodas protects Elizabeth and Merlin stands in front of Arthur. As it clears, Galand is revealed. Hawk is confused by the power level that he has. She tells Merlin that her earring must be malfunctioning because he can't have a power level of 26,000.

Retrieved from "https://nanatsu-no-taizai.fandom.com/wiki/Revival_of_The_Commandments_Episode_4?oldid=149044"
Community content is available under CC-BY-SA unless otherwise noted.