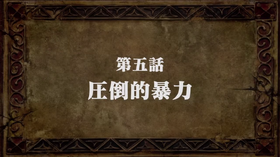 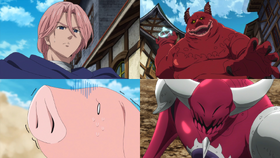 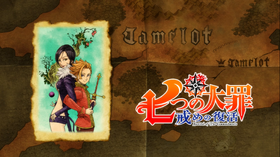 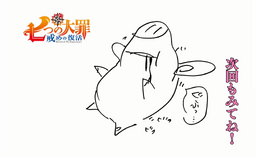 Overwhelming Violence「圧倒的暴力 Attōteki Bōryoku」is the fifth episode of Season 2 of the The Seven Deadly Sins anime.

The fairies reconcile their differences with King as Ban leaves the forest. Meanwhile, Meliodas and gang are overwhelmed by the sheer power of Galand.

Galand stands in front of what's left of the Seven Deadly Sins and Arthur's men. They can't believe that he has a power level of 26,000. Merlin asks Hawk what his magical power is. Hawk says it's zero and wonders if the magical eye earring is busted. Merlin believes that that's because of the lingering effects of the seal. Diane believes that they should attack now because of this. Meanwhile, the Sacred Tree has been restored even after it was destroyed by the Albion. King is unconscious on the ground with his head in Gerheade's lap. Ban stands over him and drips some of his blood in his mouth. King's wounds vanish and he wakes up. The fairies rejoice that the Fairy King has woken up. King is confused but Gerheade tells him that the only person meant to lead them is King. Ban is happy to hand over the title and prepares to leave. Gerheade tries to apologize for what she did to him. He grabs her by the collar and tells her that if she ever tries to hurt Elaine again that he'll kill her. Ban throws her down and starts to walk away with Jericho on his heels. King calls out to him and asks him if he's really not going to go back with him to the Seven Deadly Sins. Ban says for King to tell them hi for him before he keeps walking.

Galand uses his glaive and destroys most of the city to create more room for them to fight. He tells Meliodas that he's waited eagerly to fight him one on one. Meliodas attacks with Lostvayne but Galand stabs him through the gut. Two other Meliodas's attack but Galand cuts their heads off. One more attacks from behind while the real Meliodas attacks from above. Galand grabs him and holds him by the throat. This upsets Diane who runs at the two. As she does, Merlin changes her back into a giant. Diane raises Gideon and slams it down only to have Galand kick it back up at her. It hits her head and falls to the ground. Merlin uses a spell to teleport Galand away so that they have time to strategize. Or so they thought, in reality, Galand leapt beyond her range of power. Merlin assumes that he retreated but then he appears behind her. Arthur tells her to run by Slader jumps in front of her. He readies to attack but Galand strikes first sending Slader flying. He lands with one of his arms torn off. Merlin offers to make a deal with Galand. She keeps talking to him as she tries to think of a plan. Galand realizes that she's lying to him and turns her into stone. He is Galand of Truth and to speak a lie in his presence will automatically turn the person into stone.

Meliodas attacks Galand, giving Slader enough time to grab Merlin and run. The other Holy Knights decide to help so they follow Meliodas onto the battlefield. Galand takes them out easily. Meliodas continues to attack but gets both his arms cut off in the process. Meliodas uses his demon powers to reattach his arms. As he walks towards Galand, his arms become surrounded by purple fire and on his face appears a tattoo. Meanwhile, Melascula says that since they returned she's noticed that something is off. Zeldris says that he can sense it too. That the magical power that was so plentiful three thousand years ago has dried up. He muses that that's the reason why it's taking them so long to regain their powers. Monspeet says that power was the reason the 5 clans went to war all those years ago. Fraudrin says that it's fine. Two humans arrive and tell the Ten Commandments to leave because this is their spot. Derieri jumps down and steals one of the men's soul. She puts it in her mouth and eats it. They decide that they'll continue to eat souls because they'll be able to gain back their power and their ability to take out swarms of humans. Melascula sends her power to find a nearby human village so that they can eat all their souls.

Meliodas attacks Galand and actually harms him now that he's using his demon powers. Diane asks if he's okay but Meliodas mumbles to himself to not let the darkness swallow him. Meliodas surrounds Galand in power but Galand notes that his power has weakened and is able to throw his weapon through the barrier. It pierces Meliodas's stomach and hits the ground. Meliodas slides down the poll and hangs there. Galand retrieves his weapon and stabs Meliodas through the eye. He then goes and stabs Slader, who was protecting Merlin but her head falls off due to the action. Galand also slashes at Diane. He approaches both Elizabeth and Arthur who Merlin has kept in protective boxes. He slashes at the boxes but they don't break apart. Galand is impressed and tells them that today is their lucky day before he shoots up into the sky and flies away. Elizabeth and Hawk notice someone walking towards them through the dust. It turns out to be Gowther who laughs and laughs at what he's witnessed.

Griamore, Gilthunder, and Howzer are riding down a road when they come upon a group of peddlers. Gilthunder senses that something is wrong and goes to investigate. The peddlers are alive but it's like they're just a shell with no substance. Griamore suggests they carry them to the village when they hear a scream. In the village, a monster chases after people collecting their souls. The three Holy Knights manage to dispatch of the monster quickly. The villager's souls are returned to them once the monster is destroyed. Just as they're about to celebrate, another monster appears. Hendrickson walks up behind them and tells the trio that that monster is a Grey Demon. He says that it's going to take the four of them to beat it so they might as well join forces. Gilthunder asks how Hendrickson is still alive.

Retrieved from "https://nanatsu-no-taizai.fandom.com/wiki/Revival_of_The_Commandments_Episode_5?oldid=149045"
Community content is available under CC-BY-SA unless otherwise noted.