The Great Holy Knight Atones For His Sins 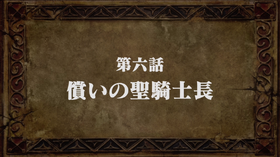 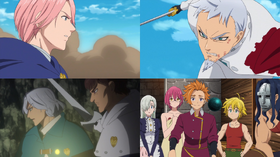 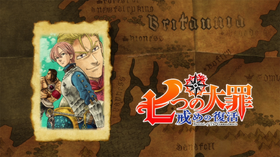 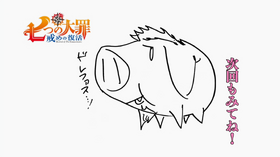 The Great Holy Knight Atones For His Sins「償いの聖騎士長 Tsugunai no Seikishi-chō」 is the sixth episode of Season 2 of The Seven Deadly Sins anime.

Hendrickson thought to have been defeated against Meliodas, aids Gilthunder and the Holy Knights against a powerful Gray Demon.

Griamore is in shock at seeing Hendrickson having believed that Meliodas had defeated him. He says that Hendrickson killed his father but Gilthunder tries to tell him that now is not the time to avenge him. Suddenly, the Grey Demon attacks and Hendrickson tackles Griamore to the ground to avoid it. Hendrickson reveals to Griamore that Dreyfus is still alive. Griamore doesn't believe him. Hendrickson tells the trio of Holy Knights that they need to help get him as close as possible to the Grey Demon. Howzer asks Gilthunder what they should do. Meanwhile, the Grey Demon is summoning a new attack that will kill them instantly if it touches them. Gilthunder and Howzer attack the demon but it retaliates with an attack so powerful that it clears the area around it of houses. Griamore can shield them but fails to protect Hendrickson too. Gilthunder realizes that the demon is the same type of demon that Hendrickson had fused with. Hendrickson attacks the demon on his own and gets knocked down. The Grey Demon is about to smash him with his hand when Howzer blocks his path and obliterates its hand with his magic. Gilthunder then goes for the middle while Hendrickson jumps up on top of the demon and uses his magic to destroy the demon by just touching its forehead. He used his magic to purge an unnatural soul of the demon's body.

Gilthunder is confused because that was his father's power. Hendrickson explains that Zaratras was born a druid known as the Sages of the Forest who worshipped the Goddess. Hendrickson says that Zaratras was a true Holy Knight Grand Master. Gilthunder grabs him and asks why he killed Zaratras if he thought so highly of him. Hendrickson tells him that it began ten years ago when Dreyfus and he went to investigate the collapse of Kingdom of Danafor. While investigating, they came into contact with an unnatural presence. It offered to make their dreams of becoming a grandmaster and the most powerful holy knight come true if they gave it use of their bodies. Both decline the offer so the demon decides to take it by force. It attacks Dreyfus but is unable to take over since he's able to resist the demon's manipulation spell. It decides instead to inhabit Hendrickson. Dreyfus tells the demon to get out of his friend's body and even threatens to kill him. The demon says that he can try but that it'll only be Hendrickson that dies. The demon asks if they're going to kill each other or crawl out of this hole and get a drink. Dreyfus drops his sword and swears that if the demon kills Hendrickson that he will kill him. The demon guarantees Hendrickson's safety and transfers itself to Dreyfus's body. The two of them climb out of the hole and head back to the kingdom.

Hendrickson tells the trio of Holy Knights that by then his mind was under the demon's spell. He reveals that Dreyfus and he conspired to kill Zaratras because they believed he posed a threat to them. How they framed the Seven Deadly Sins for the crime and had them exiled. They ask why they framed the Sins. Hendrickson says that it was because the demon had battled Meliodas in Danafor and fled in defeat. He waited and regained his powers choosing Dreyfus as his host body to enact his revenge. Hendrickson reveals that the demon's name is Fraudrin and that he is responsible for killing the love of Meliodas's life. Meliodas apologizes to Liz for not being able to protect her. Liz tells him that they'll meet again. Meliodas opens his eyes to find Elizabeth standing over him. She jumps on him and he asks where everyone else is. She tells them that everyone's fine. Slader got his arm reattached. Arthur cries over Merlin because he wasn't able to protect her. Meliodas and Elizabeth walk in. Meliodas is curious why Galand left them alive. Gowther says that he manipulated Galand's memories into thinking that he killed all of them. Gowther shows them a bracelet that he wears on his wrist that'll keep him from losing control. Merlin says she put it on Gowther when he wasn't looking.

They all turn to see if Merlin has returned to normal but she's only speaking through her orb, Aldan. She tells them that she was able to transfer her soul to it before she turned to stone completely. Merlin says that the commandment can't be reversed and that the only thing that could challenge it would be the Goddess Clan. She goes on to say that Galand is extremely powerful even with his magical powers depleted and that their combined strength wasn't enough to beat him. Slader reminds them that there are ten members in the Ten Commandments. Meliodas says that they have to come up with a strategy. Elizabeth asks Hawk how they beat the Ten Commandments years ago. Hawk says that they were more powerful. Merlin agrees and says that our knights are weak since they have peace and don't need to train. She tells them that for them to win they must become stronger. She assesses their power levels: Meliodas has 3370, Diane has 3250, Gowther has 3100, Merlin has 4710, King has 4190, Ban has 3220. Making it a total of 21840. Merlin says that if the Ten Commandments are as powerful as Galand then their total power level would be 260,000.

Merlin says that both Elizabeth and Arthur have to awaken their magic. Arthur is hesitant because he couldn't even protect Merlin while Elizabeth, coming to terms with her current lack of strength, says that she'll do whatever it takes and that she won't let them down, to Arthur's shock. Merlin says that they also must search for the seventh sin: Escanor. Meliodas agrees and says that he's going to go check on Diane. Elizabeth and Meliodas are walking down a hallway when King appears through a portal. Hawk is upset with him because he bailed on them when they needed him to fight the demons and King exclaims that he fought some too. He asks if Diane is hurt and flies to go see her. She's laying down but wakes up when they all arrive. King starts to talk to her but Diane asks if they know each other shocking him.

Retrieved from "https://nanatsu-no-taizai.fandom.com/wiki/Revival_of_The_Commandments_Episode_6?oldid=149052"
Community content is available under CC-BY-SA unless otherwise noted.