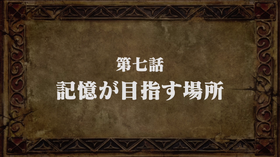 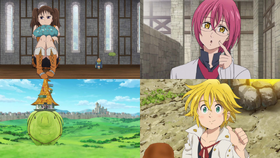 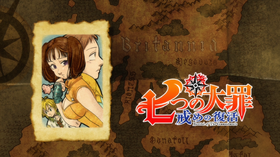 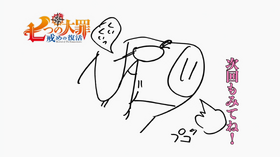 Where Memories Lead「記憶が目指す場所 Kioku ga Mezasu Basho」 is the seventh episode of Season 2 of the The Seven Deadly Sins anime.

An injured Diane awakens, having trouble remembering her comrades. With her memories fading, she heads for Megadozer, home of the Giant Clan.

Diane doesn't recognize King or Elizabeth but does know who Meliodas is. Merlin says that Diane's memory loss could be because of the blunt force trauma to her head. Hawk asks if Merlin got her body back but Merlin tells her that this is just an illusion. Meliodas says that it's been a long time since Diane called him by his first name instead of captain. Hawk is sad for King but also almost got eaten by Diane. Diane and King sit side by side. King begins to tell her about his feelings when Diane's eyes begin to glow purple and she forgets about Meliodas. King tries to tell her who Meliodas and the Seven Deadly Sins are but she's forgotten that too. King goes to tell Merlin and they decide that for now they'll just observe her. But when they go to see her she's disappeared. King wonders where she could've gone and Gowther tells them that she's going to where she used to live before she joined the Seven Deadly Sins. Gowther reveals that he erased Diane's memories as a test. King asks him if he felt anything when he removed the memories and Gowther says that feelings aren't necessary for that. King tells Gowther that he's disappointed in him because a person's heart isn't a plaything. He punches Gowther into the wall. King asks Meliodas if he can go look for her and Meliodas says that they'll all go look for her. Slader grabs Gowther and calls him an idiot.

On the Hawk Mama, Meliodas tells them that Diane is heading to Megadozer because she used to live there. King swears that he'll get Diane's memories back. As Diane runs back to her home, she remembers a battle that she fought with Dolores and Matrona against the barbarians. They win and return to their home where they are greeted by other giants. Matrona asks Diane and Dolores what happened out on the battlefield and how many humans did they kill. She says that there will come a time when they'll regret not finishing them off completely. Diane believes that killing them because they might hurt her is ridiculous and she wants to know why they have to help the humans fight each other. Matrona says that they're coexisting. Matrona says that seeking out warfare is their duty and death by combat is their greatest desire. She goes on to say that winning the battle is the only justice there is. Matrona trains with Dolores and Diane. Dolores doesn't fair well but Diane holds out much longer. Dolores stands in front of Diane and tells Matrona no more. Matrona tells her to have a child then and to contribute to their race.

Later, Dolores tells Diane that she's going to leave their homeland because she hates battle. Dolores asks if Matrona really meant it that if she had a baby she'd be excused from battle. Diane says that that isn't a good reason to have a baby. Diane overhears Matrona telling other Giants that she's going to train Diane to be one of their strongest warriors. This prompts Diane to go and tell Dolores that she'll leave with her. Dolores tell her that she changed her mind and isn't going anywhere. Diane leaves on her own but is stopped by some humans who tells her she has to pay to use their road. Suddenly, a man appears and beats them up for having treated Diane badly. It is Meliodas and he invites her to have lunch with him. He tells her to come visit him in Kingdom of Liones sometime. Diane tells him that she wouldn't fit in. Meliodas says that that's okay because all of his friends are different too. They say goodbye and Diane rushes home to tell Dolores. But when she gets home she learns that Dolores has been killed by bandits.

Diane asks who sent her out there and Matrona says it was her. Diane punches Matrona and Matrona punches her right back. Matrona asks Diane if she's like Dolores. Diane says if push comes to shove then yes she'd fight but it would be to protect someone she cares about. Matrona disagrees with her and asks her who put those thoughts in her head. She reminds Diane that she's part of the Giant race, not the others. Diane goes outside and looks up at the moon. She gets flashes of memories about her and King. She wishes that she could live with Meliodas. The next day, Diane and Matrona arrive at the battlefield to help the Liones soldiers. The leader tells Matrona that the enemy has made themselves invisible. He hears something and directs Matrona in that direction and then another. The second time she falls into a trap and boulders fall on top of her. The leader reveals that their plan was to take down the Giants all along. They are about to attack Diane when Matrona uses her power on the army. The leader has his army fire arrows at the two Giants. Matrona notices they are coated with something and steps in front of one meant for Diane.

Matrona collapses having been dosed with dragon poison. She uses her magic to injure the leader before she falls into Diane's arms. Matrona tells Diane that her parents wanted her to raise Diane as her younger sister. She tells her the only thing she knows how to do is fight and she really could only teach her that. Matrona says that Diane has to protect herself now and to be cold-hearted. Diane says she can't do that because she isn't like her. The leader of the Liones soldiers goes to attack again but Matrona takes care of them once and for all. Right before she dies, Matrona tells Diane that if she really pushed herself she'd be the best warrior. Diane cries as she holds Matrona. Two soldiers that survived say that they must go back to Liones and report what happened.

Retrieved from "https://nanatsu-no-taizai.fandom.com/wiki/Revival_of_The_Commandments_Episode_7?oldid=149053"
Community content is available under CC-BY-SA unless otherwise noted.