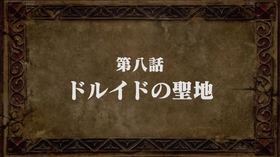 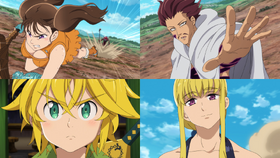 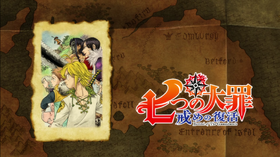 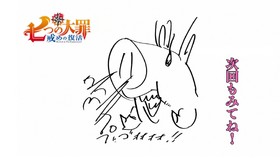 The Druids' Holy Land「ドルイドの聖地 Doruido no Seichi」 is the eighth episode of Season 2 of the The Seven Deadly Sins anime.

Meliodas and others head to Megadozer in hopes of finding Diane. Meanwhile, a confused Diane encounters Galand of the Ten Commandments once again.

Hawk Mama carries the Seven Deadly Sins towards Megadozer in search of Diane. King asks Merlin if she could just teleport them there. Merlin says that she can't because she's too focused on keeping her soul in Aldan. Plus, she'd like to keep some of her magic in case of an emergency. Meanwhile, Galand brags to the other Ten Commandments about having killed Meliodas and his gang. Fraudrin is surprised because he can't believe that Meliodas could be brought down so easily. Galand decides to go on a walk. Diane continues to walk towards Megadozer intent on telling everyone that Matrona protected her when she runs into Galand. He swears that he killed her. She tries to run away from him but is blocked by Monspeet. Monspeet is interested in eating her soul because it could help restore his powers. Diane tells them both to leave her alone because she's never seen them before. She doesn't turn to stone for lying because she truly can't remember meeting Galand. Galand says that this time he will kill her and attacks her by kicking her in the stomach. She falls to the ground. Monspeet is about to help himself to her soul when a spike of earth sends him flying. The same magic is used to encase Galand in a prison brick.

Meliodas forces Hawk Mama to stop because he senses Monspeet and Galand. But he also senses another person that has a power that he hasn't come across before. The smoke clears and Diane sees someone who looks like Matrona. She's so relieved that Matrona is alive that she's caught off guard when the other giant punches her in the stomach and knocks her out. The giantess hoists Diane over her shoulder and hides just as Galand breaks out of his stone prison. He can't find the two giants so he starts attacking the ground in hopes of drawing them out of hiding. Monspeet gets up off the ground and senses Meliodas's approach. He sends his magical power out to find the group of concentrated power. Meliodas tells Hawk Mama to change course but the magic does the same as if it's pursuing them. Meliodas is hesitant to use his signature move because then they'll know exactly where he is but it doesn't look like he has a choice. Hawk Mama changes direction and goes straight towards the oncoming magic despite Hawk telling her not to. Hawk Mama opens her mouth and swallows the magic much to everyone's surprise. Monspeet is upset because he learned nothing and wasted what little magic he had on that endeavor. Galand is unable to find Diane and the other giant but is sure that he wounded them.

Merlin suggests that they change course because Diane's presence has faded. She believes that if they continue on they'd be putting Diane and the person helping her in danger. Meliodas asks Merlin if she has another direction in mind. Merlin tells him that they need to start powering up and in order to do that she's going to return the power she stole from him. She explains that ten years ago a certain young girl was injured trying to help them and the captain started to lose control. For everyone's safety, she separated his strength from him. Merlin tells him that they're going to need that power back if they're going to battle the Ten Commandments. Meliodas asks where the power is now and Merlin says it's in Istar. They arrive in Istar, the holy land of the druids. Elizabeth knows that they are in the right place but that there are only stones here. She keeps walking and passes through a gate that reveals an island with two large structures on it. Meliodas says that the gate has been left open and Merlin explains that they need the spellcasters permission to walk through. Three of the Druid Chiefs are there waiting for them having sensed their arrival. They are Jenna and Zaneri with their priest Theo. Gowther and Arthur hang back.

Zaneri leads Meliodas and Elizabeth to the tower on the right. Meliodas asks if his power is in there. Zaneri says yes but that he'll have to go through a trial to retrieve it. Zaneri is worried that he might be able to take it but Meliodas says that it just pushes him even harder to face the trial. Zaneri summons her magic and Meliodas is transported to when he was captain of the Holy Knights at the Kingdom of Danafor. He hears a voice behind him and turns to see Liz.

Retrieved from "https://nanatsu-no-taizai.fandom.com/wiki/Revival_of_The_Commandments_Episode_8?oldid=115506"
Community content is available under CC-BY-SA unless otherwise noted.