A Promise To A Loved One 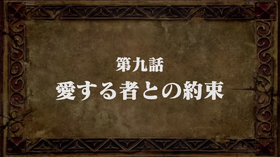 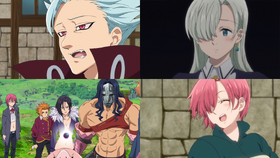 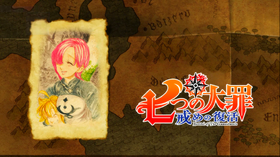 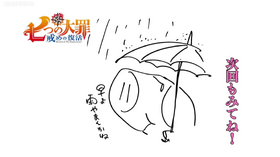 Ai suru Mono to no Yakusoku

A Promise To A Loved One「愛する者との約束 Ai suru Mono to no Yakusoku」 is the ninth episode of Season 2 of the The Seven Deadly Sins anime.

Acknowledging his lack of strength to face the Ten Commandments, Meliodas vigorously trains with the Druids of Istar to regain his sealed powers back.

Galand asks Melascula where she's been and she says that she's just been having a little fun. In Ivanloake, Ban hits another dead end when it comes to finding a way to bring back Elaine. The man does tell him that he heard a rumor that someone in a nearby town was brought back to life. Ban asks which town and he says Ravens. Jericho and Ban head in that direction. Elizabeth asks Zaneri why Meliodas is acting so strangely. Zaneri says that this is the Tower of Trials and Elizabeth asks if this is what he has to do to get his power back. Zaneri nods and explains that he's being tested to see if his soul is worthy of the power taken from him. She hands Elizabeth a goblet filled with soil. Zaneri tells Elizabeth to make the poisoned bud within bloom. That if she can't do that then she'll never be useful in battle. Elizabeth accepts the challenge. Meanwhile, Meliodas wonders why Zaneri is showing him this illusion. Meliodas goes home with Liz and they have dinner. They hug and then Meliodas is taken to the moment when Liz died. His eyes begin to glow purple and he screams as he releases enough magic to destroy the Kingdom of Danafor. The illusion resets itself and he's back to standing in the marketplace with Liz. Meliodas realizes what his test is.

Elizabeth watches Meliodas struggle and tries to help him but Zaneri tells her that she has her own test. Elizabeth asks Zaneri what she's doing to Meliodas and Zaneri says that she's putting him through a living hell. He is reliving the worst and best days of when he was with Liz. With each repetition, he's consumed by wrath and destroys everything around him. Zaneri says that this is a test that will kill off his emotions completely in order to prevent him from letting his emotions dictate his actions. Jenna leads the rest of the Seven Deadly Sins to the Cave of Training. She tells them that they are all way too fragile and that they need to get into fighting shape to protect this world. She also tells them that another group arrived before they did and that they are acquaintances of theirs. At first, they think it's Ban and Jericho but then Hendrickson walks out and catches everyone off guard. King goes to attack but then Hendrickson passes out. Jenna asks that they put their anger for him aside since he's finally gotten back to normal. The point out that something is behind Hendrickson and Hawk goes to investigate. It turns out to be Griamore, Gilthunder, and Howzer laying in a heap at the cave entrance.

Elizabeth and Zaneri continue to watch as Meliodas struggles with the trial. Finally, Zaneri pulls him out of it unconvinced that he's able to control his emotions. She says that if he keeps at it his spirit will die, not his emotions. Zaneri then scolds Elizabeth for reassuring Meliodas, who asks Zaneri to send him back one more time. Zaneri says that he won't be able to withstand that kind of stress. Meliodas says that he can take it and that he needs to become stronger for the ones that he needs to protect. Zaneri agrees to send him back. Meliodas realizes that he has to let go of his emotions which means forgetting about Liz. But he just can't do it because forgetting about her is impossible. Zaneri goes to pull Meliodas out but Elizabeth steps in front of him. She tells Zaneri to have faith in him. Meliodas vows to never let anything like what happened in Danafor happen again. He wakes up from the trial much to Zaneri's surprise. He tells her that since he passed he'll be taking his power back.

Jericho wakes up Ban who fell asleep in the tavern. They leave the tavern and head for an inn. Ban asks the innkeeper about the rumor but he says that it's probably a lie. They head up to the room where Jericho takes the bed while Ban sleeps on the floor. She asks Ban how he knows so much about Ravens. Ban tells her that he used to live here as a kid but that that was a long time ago. Suddenly, they hear a comotion coming from outside. They look out and see a couple of thugs beating up on a hooded figure. Ban tells Jericho to leave it alone until he overhears that the hooded figure may be the person that's been bringing people back to life. Ban intervenes and saves the figure. He brings the figure back to their room. The figure turns out to be a beast man. Ban asks him if the stories about him are true and the beast man tells him that he doesn't have those type of powers. The beast man goes to leave but collapses so Jericho gives him her bed. The beast man explains how he has to scrounge around for food and live like vermin. He tells them that they probably never had to do that. Ban remembers when he was a child and had to steal food to survive. He was tossed into prison where he met Zhivago.

Retrieved from "https://nanatsu-no-taizai.fandom.com/wiki/Revival_of_The_Commandments_Episode_9?oldid=149056"
Community content is available under CC-BY-SA unless otherwise noted.