The Divine Axe Rhitta「神斧 リッタ, Jinpu Ritta」is a Sacred Treasure that was in the possession of the Lion's Sin of Pride, Escanor.

Rhitta is a giant ornamental axe with a blade shaped like a crescent moon, similar to that of a Monk's spade. The axe also features two golden protrusions, one larger than the other, with the white tips of a spear, the longer one is in the middle at the top of the axe and the smaller one is on the opposite of the blade of the axe. The handle is dark blue and it features a golden semicircular guard with four golden spikes on it. Its design specs and distribution of weight are (likely intentionally) off; most of the weight is concentrated in the head, leaving it off balance, and even more difficult to wield than its impressive weight would already make it.

By saying the command "Sacred Treasure Release"「, Jingi Kaihō」, Escanor can release all the power he has stored in Rhitta in an instant. The release is accompanied by an incredible wave of light and heat, illuminating the night sky and causing onlookers to mistake it for the sun itself. He can call it to himself at will, and it will travel at incredible speeds through the sky to reach him.[1] By having enough stored power, Rhitta also allows Escanor to assume his daytime form at night.[2] 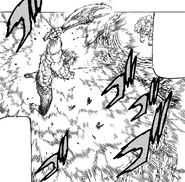 Escanor hold Rhitta with one hand