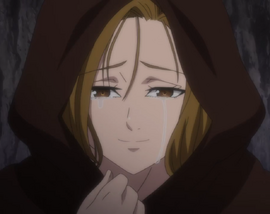 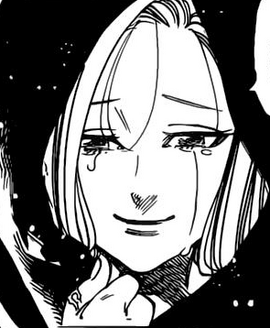 Rosa「ローザ」 is a woman who helped Escanor escape from his family who were hunting him down for attacking his brother, Daymond.

When aiding Escanor escape, she wore a cloak to hide herself.

She is a kind woman, willing to save Escanor after his family and kingdom turned against him, even if that meant betrayal against the kingdom.

She helped hide Escanor from death after their entire kingdom set out to kill him when he first awakened his power and accidentally hurt his brother. She tells him she is his ally and tearfully bids him farewell before hiding him in a barrel and set it adrift at sea.[3]

Rosa died when the Kingdom of Castellio was destroyed by barbarians.[4]

When Escanor is sent to the Capital of the Dead by Merlin, he meets Rosa there. Escanor initially refuses to see her from the front for being disappointed in himself, but rectifying himself, Escanor thanks Rosa for saving him and promises to fully live the life she saved regardless of what tragedy falls on him or how lonely he becomes. Rosa then assures him that there is nothing to be ashamed of, as he will no longer be alone. The two remain talking for a while before Escanor returns to the living world, telling her about Merlin and how she has not changed, to which Rosa reveals that she has been watching him all along.

Rosa is an ordinary human and does not possess any superhuman abilities.

Rosa cares deeply for Escanor and even betrayed her country in order to save him after his family and kingdom turned against him. Even in death, she never regretted her decision and kept watching over him.

Retrieved from "https://nanatsu-no-taizai.fandom.com/wiki/Rosa?oldid=138114"
Community content is available under CC-BY-SA unless otherwise noted.