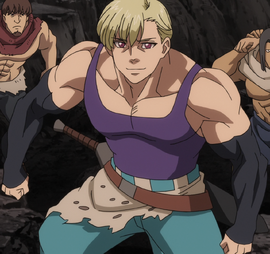 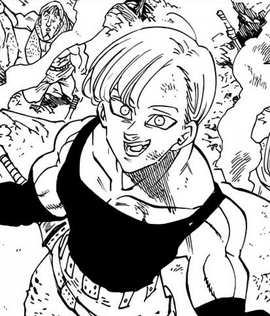 Rou「ロウ」 was one of the humans fighting in the Holy War 3,000 years ago as a member of Stigma. Though later he revealed that he and his three human comrades in the alliance were plotting to eliminate Stigma for destroying his village years prior.

Rou looks nearly identical to Ban, except with a neater haircut and a fringe that reaches his right eye. He wears a sleeveless dark tank top and elbowguards with spotted, light colored pants and sandals. He wears the sheath of his sword on a belt that cuts diagonally across his waist.

Rou comes off as a welcoming individual impressed with others as he praised Meliodas for saving him and his friends from the Demon Clan during one of the battles of the Holy War. He even befriended other members of Stigma in particular, Gerheade.

Beneath his passive exterior, he's actually very hateful and vengeful to Stigma for slaughtering every member of his village, including his childhood friend, simply for harboring a wounded, yet peaceful and kind Demon. He then swore to slaughter every Goddess, Fairy, and Giant within the alliance as part of his revenge.

After slaughtering nearly all of Stigma, Rou became somewhat regretful of his vengeful plot upon realizing that he had become just like them, seeing killing as the only solution. He wondered what Meliodas, another benevolent Demon, would think of his actions if he saw what he had done and personally apologized to Gerheade as she was the only one whom he spared.

Rou, like many of his human compatriots used to live happily in a humble village, he'd regularly train in the mountains to hone his hunting and fighting skills.

One day while he was away, his home was attacked and burned to the ground by the Goddess Clan's strike force allied with the Giants and Fairies, called Stigma. Everything and everyone he ever cared about was taken from him. Even a village girl whom he'd fallen for, would regularly defend and protect from bullies had been brutally killed in an attack. The only reason he could surmise was because he and his neighbors helped one kindly Demon when he was passed out on the road.[1]

Since then he'd sworn revenge on them and would train profusely in order to infiltrate their ranks to destroy them all. He and the few friends he had left, who were also survivors of Stigma's massacre, would team up with the Demon Clan to accomplish this.

King and Diane saw Rou when they are fighting against Calmadios of the Ten Commandments.[2] Rou is seen again talking to Meliodas and they become friends, even though Rou knows that Meliodas is a demon.[3]

When the demon army approaches the Fairy King's Forest, he took the task to defend the forest while Meliodas, King/Gloxinia and Diane/Drole decide to go meeting the Ten Commandments and talk to them. Before leaving, Gloxinia trust Gerheade's safety to him.

During the stay, Rou interacted with Gerheade as they made a bond together.

After Elizabeth had defeated the Indura and Nerobasta informed everyone of the two Commandments' presence, Rou attacked a giant and a fairy outside the Light of Grace while his comrades dealt with the guards and threatened everyone to stay outside while Gowther and Melascula were corrupting the gate of light. When a giant accused him of allying with the demons, he corrected her by saying he wasn't working with the Ten Commandments, only that their goals were aligned, to wipe out all the members of Stigma.

This led to an all-out bloody fighting between the humans and the other races within the Fairy King's Forest as many combatants were killed in the ensuing chaos with Rou cutting down as many Stigma members while Gerheade watches helplessly in grief of the betrayal. There, Gerheade tries to reason with Rou and make him stop, although he refuses despite not being willing to kill her. There, Gerheade is seriously injured by one of Rou's companions, who takes one eye, her legs and her wings. There, Rou kills him in retaliation, being him and Gerheade the only survivors of the battle. There, the two begin to talk about what happened, with Rou revealing his tragic past that led him to want revenge on Stigma, as Gerheade takes everything as a punishment for her inaction before the horrible plans of Ludociel. Although Rou claims that he got his revenge, Gerheade discovers upon reading his heart, that Rou felt terrible for what he had done.

Soon after the battle ends, when Gloxinia returns and sees Gerheade seemingly dead in Rou's arms, he brutally kills him, with no resistance from the latter who gladly accepted it as punishment. The betrayal of Rou and his companions led to Gloxinia to develop a great hatred against humans and the rest of Stigma, causing his eventual descent to the Demon Clan.

After dying, he was reincarnated into the black hound, Oslo, and swore to protect Gerheade for the next 3,000 years.

As a participant in the Holy War that happened 3,000 years ago, Rou was one of the few humans who were strong and skilled enough to fight alongside the other races, as well as being strong enough to fight against members of the Demon Clan alongside skilled fighters like Meliodas, Gloxinia, and Drole. He has shown himself to be a proficient infiltrator as he and his human compatriots trained relentlessly to infiltrate Stigma in order to earn their trust to destroy them from within at the right moment where all the other races were completely befuddled by his betrayal once he revealed his intentions.

Rou's warrior prowess is proven in that he was able to keep up and defeat many fairies, giants and even goddesses of Stigma with his human compatriots using no more than mundane weapons and their own physical prowess. His speed and agility are top notched and superhuman where he effortlessly did a back jump towards a giant's shoulder and fatally slashed him before the latter could react and easily countered attacks from a fairy. He was also shown to be able to match and overcome the speed and skill of a goddess swordsman to land a fatal blow.

His endurance and strength are also on superhuman levels as shown where he could jump up great heights to slash air-borne fairies and goddesses and tall giants along with enduring their magical attacks with only slight strain in his movements. He even endured a blast of a goddess' Ark head on to his upper body and easily recovered to retaliate and continue killing the members of Stigma even while heavily exhausted and wounded.

Retrieved from "https://nanatsu-no-taizai.fandom.com/wiki/Rou?oldid=150999"
Community content is available under CC-BY-SA unless otherwise noted.