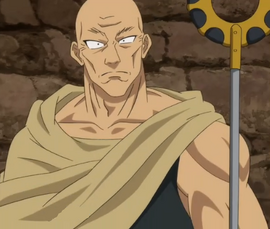 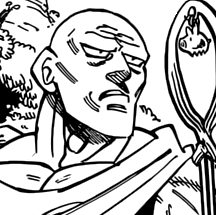 Lord Ruin
Bringer of Ruin to the Seven Deadly Sins

Ruin「ルイン」 is a Holy Knight belonging to the infamous Weird Fangs stationed at Baste Dungeon. He aided in the capture of the Deadly Sin, Ban 5 years ago.

Ruin with his armor
Ruin is a fairly large and tall man, towering over normal sized people. Outside of his armor, he is revealed to be bald and wears tight fitting clothing that made him look like a shepherd.

Ruin's helm looks like a feminine human face with white eyes and long hair with 22 holes on both sides of the helmet. He has black shoulder plates that curves inward, a flower design on his breast plate, a long black skirt that reach to the floor, and metal boots. Beneath his armor, he is shown to have a well-developed rectus abdominis muscle.

Ruin is cruel and manipulative, as seen by his laughing as he brutally injures an unarmed Elizabeth. He also enjoys seeing the face of a young girl writhing in pain.[1] Despite that, Ruin has some sense of honor as he commended Elizabeth's bravery after witnessing her selfless act to go through Friesia's deadly attack to save a child, who actually is himself in disguise.

Five years before the beginning of the series, Ruin and the three other members of the Weird Fangs confronted Ban of the Seven Deadly Sins. The resulting battle ended in Ban's capture and imprisonment in Baste Dungeon, where Ruin remained as one of the dungeon's four guardians.[2]

The guards that are guarding Ban mentions that he, along with the Weird Fangs, are at Baste Dungeon.[3]

Ruin is first seen inside the Baste Dungeon, along with the rest of the Weird Fangs, listening to Friesia informing them that she is going to launch the first offensive and kill both Meliodas and Diane.[4] Later, after him and Friesia have finished getting ready to fight the Deadly Sins, they both encounter Golgius when he returns to the Baste Dungeon.[5]

As Diane is heading for the Baste Dungeon, Ruin, having disguised himself as a young shepherd, hypnotizes her into thinking Meliodas was him, thus making her attack her captain. While Meliodas and Elizabeth flee from her, he, under the same disguise, and now accompanied by a knight also disguising himself as a shepherd, pretend to be ordinary humans, leading the two to hide him and the knight along with them, allowing him to hypnotize Meliodas as well.[6] Later, as Elizabeth protects him from Friesia's attack, believing him to be a child due to the disguise, he reveals himself to her. He then starts to beat Elizabeth to near death, explaining that even though risking her life to protect a child was admirable, the reality was harsh, as she tries to make him stop his hypnosis. Just as he tells the princess about the origins of his powers, which is the bell on his staff, he notices that the bell is gone and then realizes that Elizabeth removed the bell with her teeth. Realizing that she was aiming to remove it all along, the Holy Knight goes berserk and tries to kill her, but Meliodas, having regained his senses as Ruin's hypnosis has been cancelled, stops him.[7]

As Meliodas tells Elizabeth that he accepts her resolution, Ruin, saying that the one who strikes first wins, attacks Meliodas with his staff. While Meliodas was still flying from the hit, Ruin hits him again with his staff pinning him to the ground, commenting that the former warrior had lost his edge since he showed his back to his enemy. The Holy Knight then grabs Meliodas's head and lifted him, stating that he finds it ridiculous that the kingdom was afraid of a small child. However, just then, Meliodas punches him and then punches him again, sending him crashing into the walls of the Baste Dungeon, much to the surprise and shock of the guards stationed there.[8] Ruin, seeming to be uninjured, comments it would have been boring if Meliodas wasn't as strong as this. He explains that Holy Knights are called so because they have magic that transcends human knowledge imbued into their bodies, and then suggests that Meliodas draw his sword, since his childlike and soft fists wouldn't even scratch his armor. Ruin, seeing the young man wouldn't draw his sword, starts punching him with tremendous power, which causes the whole of Baste Dungeon to shake. Ruin thinks he crushed him beyond recognition, but Meliodas punches him back in the chest, therefore breaking his armor in that area. However, Ruin then says that his armor is nothing more than shallow skin and his body, which is stronger than steel, is his true armor, Meliodas punches him again, but with so much power that his entire hand sinks inside the Holy Knight's body, making him spit blood from his helm, thus defeating him. Ruin was sent flying into the dungeon, destroying large sections of the prison and left for dead.[9]

When the Ten Commandments invade Liones, Ruin and Friesia without their armor are confronted by civilians who intend to sacrifice them to survive. Ruin laughed at the civilians who foolishly thought they can take down the two former Holy Knights before they can use magic and brutally pushed them back with his physical strength and staff.

Then Fraudrin appears whom Ruin was relieved to believe that it was Dreyfus and thought he is bringing him and Friesia back to Liones from their exile, but his soul is soon devoured by Fraudrin.

Ruin, like all other Holy Knights, have magic imbued within their bodies. Ruin is a strong fighter as he was able to defeat Ban of the Seven Deadly Sins along with the other Weird Fangs including managing to strike and pin down Meliodas with brute strength causing the ground to crack under the pressure of his blow. He is also able to hypnotize his opponent through illusions by using his staff's bell.[10] Though Ruin is also capable of strengthening his skin almost similarly like the Giant Clan's Heavy Metal technique, which he claims to be stronger than steel and to be his true armor, he was powerless against Meliodas.[11]

He wields a circular staff which has a bell hanging at the center of the ring shaped head.

Ruin and Friesia are both members of the Weird Fangs. Friesia calls him an "old man". Although Friesia is annoyed at Ruin's stupidity when he ruined her painstaking effort of hiding from the civilians who were hunting them to be handed over to the Ten Commandments out of desperation.

Ruin and Golgius are members of the Weird Fangs although they did not interact much.

Ruin and Jude are members of the Weird Fangs although they did not interact much.

Retrieved from "https://nanatsu-no-taizai.fandom.com/wiki/Ruin?oldid=150357"
Community content is available under CC-BY-SA unless otherwise noted.