Chapter 12
The Holy Knight, Ruin, possesses hallucination and hypnotic powers, whose source is his staff's bell.

Ruin's power allows him to delude foes into believing that their comrades and allies are him, which results in them battling each other. His powers are fairly strong, him being able to delude foes the caliber of Meliodas and Diane.[1] One known method to undo the illusions is to remove the Ruin's staff's bell, which is his abilities' origin.[2] Diane was also shown to have regained her senses when Elizabeth yelled desperately for her and Meliodas to stop their battle, before being hypnotized once again by Ruin.[3] 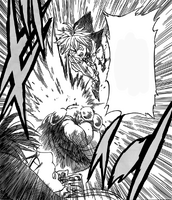 Diane and Meliodas deluded into fighting each other