Start a Wiki
watch 01:49
What is Sacred Treasure?
Do you like this video?

Sacred Treasures「神器 Jingi」are uniquely powerful weapons wielded by the Seven Deadly Sins, and were once treasures of the Kingdom of Liones.

Not much is known about the Sacred Treasures, but according to King, King Bartra Liones entrusted these weapons to the Seven Deadly Sins when the king formed the group.

After the Seven Deadly Sins' supposed betrayal 10 years ago, some of the Sacred Treasures were lost to fate: Meliodas' Lostvayne was sold to fund his Boar Hat business, Ban's Courechouse was stolen after he intentionally lets himself get captured by the Weird Fangs 5 years ago, and Diane lost Gideon for unknown reasons until she later regained it at Vaizel. King, Gowther, Merlin and Escanor remained in possession of Chastiefol, Herritt, Aldan and Rhitta respectively.

According to King, a Sacred Treasure allows the user to draw out their powers to their full potential. He exemplifies the strength by using a lake and a cup as a comparison for his use of Chastiefol in combat. As Helbram stated that the Sacred Treasures made the Seven Deadly Sins the most formidable group of knights that could surpass even the Holy Knights, it stands to reason that the Sacred Treasures cannot be used by anyone but the Sins themselves.

By saying the command "Sacred Treasure Release"「 Jingi Kaihō」, the sacred treasures unleash their great power to another level. The abilities vary between weapons. 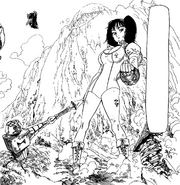 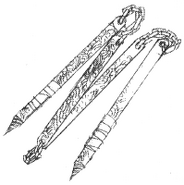 Holy Staff Courechouse
Add a photo to this gallery

Deadly Sins with their sacred treasures 10 years ago

Gideon in the Anime

Aldan in the anime

Rhitta in the anime
Add a photo to this gallery

Retrieved from "https://nanatsu-no-taizai.fandom.com/wiki/Sacred_Treasure?oldid=145616"
Community content is available under CC-BY-SA unless otherwise noted.