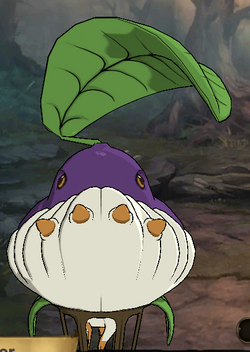 Screamers「」 are creatures that live in Britannia. They appear on Grand Cross mobile game only.

Sound screamers are purple with a turnip-like appearance. Strike screamers are yellow and take on the appearance of a butternut squash. Unlike sound versions, they also sport arms and legs.

In the main quest for the Forest of Screams, Elizabeth tells the rumor of a woman who took her own life after she was falsely accused of something and lost her child, and people have heard her cries of resentment ever since. After which, a sound screamer shows up which the party faces and defeats. In the second part, the party saves a young girl from the screamers. The girl says that her family was taken.