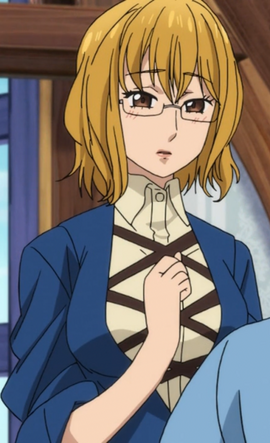 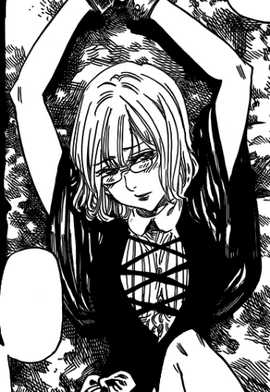 Sennett「セネット」 is the daughter of an elderly doctor, Dana who works at Dalmary Town.

Sennett is a young attractive woman with light colored shoulder length hair. She wears a black shirt over a white button down blouse, a long shirt with a belt, back sandals, and glasses.

Sennett is a polite and caring person. She loves her father very much, and was worried about him when she left; she was extremely happy when he is revealed to be alive.[1] She also cares about her dagger as it is a memento of her mother.[2]

Sennett was kidnapped by Golgius and imprisoned in the Baste Dungeon in order to force her father into killing Meliodas in exchange for her freedom.[3]

When Ban walks by the cells, Sennett is shown to be imprisoned within one of them and in chains, with a guard looking lustfully at her. She is shocked when Ban knocks out the guard easily, breaks into her cell, and tells her that she is his.[4] Ban then takes her dagger that was hidden in her shirt and releases her with it while trying it out. Thanking him, she requests him to return her dagger, since it was a memento of her mother, only for Ban to refuse, saying that it belonged to him now, which frightens her.[5]

Suddenly, and much to her surprise, the Holy Knight Jude reveals Ban's identity as one of the Seven Deadly Sins.[6] She watches as Ban and the Holy Knight fight, and is later shown to be scared when Ban stabs and kills Jude brutally while saying that a war between the Holy Knights and the Seven Deadly Sins would be exciting.[7] Being very frightened of Ban, she flees and runs into Meliodas, Hawk, and Diane, begging them to help her while saying that the "legendary" Deadly Sin had just killed a Holy Knight. She is then told by Diane to get behind her, which she does, and watches as Meliodas and Ban greet each other in a destructive way.[8] While the Baste Dungeon is being destroyed by the two arm wresting, she grabs a hold of Diane and seems to be very frightened as they all fall.[9]

She later returns to the village with the other captives[10] and is soon reunited with her father, who is revealed to still be alive. As her questions about why him and her were attacked and imprisoned by the Holy Knights respectively are answered, she tells him that his trying to kill Meliodas was not his fault, but the Seven Deadly Sins' fault. However, the doctor argues in favor of Meliodas, explaining that even though he had tried to kill Meliodas, the young man saved her and stood up against the Holy Knights.[11] Later, at night, during a party held to thank Meliodas and the others, Sennett notices the meteor shower and brings it to her everyone's attention.

Her hidden dagger, previously taken by Ban, was returned by Meliodas later on after he and his Co. left Dalmary Town for the Capital of the Dead.

Sennett is an ordinary human and does not possess any superhuman abilities. However, since her father is a medical doctor, she may have some knowledge related to medicine.

Sennett is Dr. Dana's daughter. Seeing as how her father would do anything to get her back[13], and how happy she is to be reunited with him[14], it is evident that they have a good father-daughter relationship.

Retrieved from "https://nanatsu-no-taizai.fandom.com/wiki/Sennett?oldid=150359"
Community content is available under CC-BY-SA unless otherwise noted.