The Seven Deadly Sins「七つの大罪, Nanatsu no Taizai」 are the strongest and cruelest order of Holy Knights in the Kingdom of Liones. They were formed by seven brutal criminals, who had all been convicted for grievous crimes and had carved the symbols of seven beasts onto their bodies.[1] They are the titular main protagonists of the series.

Unbeknownst to even most of its members, the Seven Deadly Sins were formed for the expressed purpose of defeating the Demon Clan's Ten Commandments. The king of Liones had a premonition through his power Vision, that they would become the kingdom's protectors. Hearing this, both Meliodas and Merlin (who was only known to Meliodas at the time) took it upon themselves to find the other five, in order to crush the Ten Commandments, should they ever be revived.[2]

The members of this group were originally an independent order of knights serving the kingdom of Liones. They were declared as traitors and villains after being framed for assassinating Zaratras, the Great Holy Knight, after heeding an order to meet up with him at the castle. They found him murdered through no fault of their own and were quickly surrounded by the kingdom's Holy Knights. Meliodas ordered the group to disperse to avoid capture, and everyone was able to escape separately. It was initially suspected that one of the members was a traitor who helped in the nefarious plot, as Meliodas was knocked unconscious shortly after issuing his order. It is later revealed that Merlin was the perpetrator, and was due to Meliodas losing himself to his anger when young Elizabeth got hurt trying to help him escape. However, she did ask for forgiveness.[3] One of the Seven Deadly Sins' feats includes defeating the troll queen, with them having also broken the Great Druid Altar.[4]

The Seven Deadly Sins before the betrayal were widely known as the strongest knights of Liones and were greatly admired by several Holy Knights and apprentices, including Little Gil and Doting Dale. The group was directly under the Great Holy Knight Zaratras' command.

The Seven Deadly Sins reappeared ten years later in the kingdom, having regathered six of its members over a short duration. They aided the third princess of Liones, Elizabeth, helping her liberate the kingdom from the oppressive rule of the Holy Knights and stopping Hendrickson's plan to release the long-sealed Demon Clan into the world.

Upon Hendrickson's defeat and his villainous plan to revive the Demon Clan being fully realized by the rest of the kingdom, the Seven Deadly Sins were praised as heroes for saving the kingdom. They were also cleared of their false crimes, and welcomed back into the kingdom of Liones once more.

After a month, Meliodas resucitate and along with Escanor and Merlin, prevents the Commandments from taking control of Liones. With the rejoining of Diane and King that were by their one, and Gowther that was temporary imprisoned, the Seven Deadly Sins were oficially reformed. However, after defeating Melascula in Corand and battle Chandler, Meliodas was returned to his previous evil state as a result of his emotions have been taken by the Demon King in his resurrection. Meliodas, having decided to become the new Demon King to break his curse and that of Elizabeth, officially declares the dissolution of the Seven Deadly Sins.

The others, however, are not willing to accept it, so they decide to continue fighting against the Demon Clan and prevent Meliodas from becoming the Demon King.

With the exception of Ban, who goes to the Purgatory hoping to recover the emotions of Meliodas, the Seven Deadly Sins along with Liones allies with Stigma and the resurrected Four Archangels to wage a new Holy War.

After Meliodas absorbed all of the Commandments, the Demon King took possession of his body and engaged in a fierce fight against the Deadly Sins in an effort to kill Elizabeth. Ban, meanwhile, reunited with Meliodas in Purgatory, was able to escape to help his comrades, while Meliodas struggled from within against his father's influence. All together, they managed to expel the Commandments from Meliodas' body, which reverted back to how it was before.

Having acquired god-like powers similar to that of his father, Meliodas confessed to his comrades that he would soon be forced to remain living in the Demon Realm to prevent the slow destruction of Britannia. However, shortly before his departure, the Deadly Sins discover that the Demon King is still alive, but through the body of Zeldris. Determined to save his little brother, Meliodas, accompanied by Elizabeth, then joined by the other Deadly Sins and Gelda, set off towards Lake Salisbury to finish off the Demon King.

During the confrontation, the Deadly Sins and Gelda, also assisted by Mael, managed to free Zeldris from the grip of the Demon King, but the latter used the Commandments to merge with the ground of Britannia, but the Sins succeed despite all taking him down with their strongest combined attack. In order to prevent the Demon King's return, Meliodas sacrificed his god-like powers to destroy the Commandments. However, Escanor, consumed by his overuse of Sunshine, died, after receiving a first and last kiss from Merlin.

Shortly after celebrating the Demon King's defeat, Merlin agreed to let the Deadly Sins accompany her, while she resurrected Arthur Pendragon as the "King of Chaos". The Lady of the Lake then agreed to reveal the secrets of Merlin's childhood and how the latter had used the Sins to free Chaos, a primordial entity being at the origin of the five Clans, but which was sealed by the Supreme Deity and the Demon King in Hawk Mama's body.

Shortly after Arthur's resurrection, Cath, a Purgatory Creature he had taken in, attempted to devour him, revealing himself to be Cath Palug, a monster who once defied Chaos to take him over. The Deadly Sins attempt to fight Cath at least twice, but remain powerless against Chaos's power partially held by Cath, until Arthur decides to intervene with Excalibur, then in turn decides to engulf Cath, so that no one opposes his building an "Eternal Kingdom".

Six months later, as King and Diane celebrated their wedding, the Deadly Sins, with the exception of Merlin, agreed to unite one last time to fight armies of Fairies and Giants controlled by Dahlia and Dubs, themselves manipulated by the Breath of Bless of the Supreme Deity. When Dahlia and Dubs were defeated by Meliodas and Zeldris, the Supreme Deity led several manipulated Goddesses against the Holy Knights and decided to personally intervene to eliminate the Deadly Sins and initiate a third Holy War herself without the Demon King's help. However, the Supreme Deity was ultimately defeated in turn by the combined efforts of Meliodas and Zeldris.

After Meliodas and Elizabeth's wedding and coronation, the Seven Deadly Sins finally decided to go their separate ways: Meliodas and Elizabeth remained in Liones to rule together, while Bartra would retire; Merlin stayed with Arthur to rebuild Camelot, with the help of Nanashi and Orlondi; King and Diane remained in the Fairy King's Forest, to rule the Fairies and Giants together; Ban and Ellaine set out to explore Britannia, then founded Benwick, on the border of the Fairy King's Forest; Gowther also sets out to explore Britannia.

11 years later, the Seven Deadly Sins, with the exception of Merlin, have gathered to celebrate the tenth birthday of Tristan, the son of Meliodas and Elizabeth.

There exist seven laws that each member of the group is required to abide by. So far, only five of these laws has been revealed. The laws were created by Meliodas.[21]

The Seven Deadly Sins in their armor 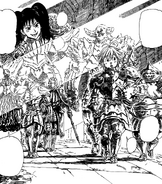 The Seven Deadly Sins 10 years ago 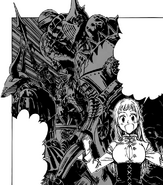 Seven Deadly Sins in their armor