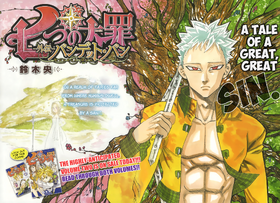 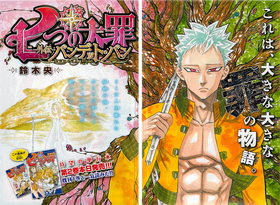 Ban the Bandit「バンデット・バン Bandetto Ban」 is the first side story of the Nanatsu no Taizai manga.

Somewhere in northern Britannia, Ban arrives at the Fairy King's Forest in search of the Fountain of Youth. He quickly climbs up the large majestic tree, and ends up meeting a mysterious young girl whom he ignores initially. He decides to ask her who she is, only to discover that she is the Guardian Saint protecting the fountain. Swiftly, she swings her hand and the winds blow Ban off the tree. However, Ban survives the fall and persistently continues to climb up again. He repeatedly climbs up and gets blown off, until both of them grow extremely annoyed.

In order to obtain the fountain, Ban equips himself with his three-section staff, leading Elaine to believe that he was planning to kill and steal like all other humans. To her surprise, he quickly grabs the Fountain of Youth and begins drinking. But before he could even take a sip, Elaine manipulates the tree branches and immobilizes him by grabbing all of his limbs. She then persuades him that without the Fountain of Youth, the forest itself will die. Astonishingly, Ban replies straightforwardly, stating that he understands. When Elaine decides to read his heart, she discovers that he really likes the ale from the forest, and has indeed the intentions of giving up.

She releases him and the two begin to get to know each other. Ban tells her that the reason for stealing the fountain is to hope for something good to happen in his life. In response, she replies saying that she already lived for over 700 years, protecting the cup in place of her brother, King, who abandoned her. Ban decides to show her his ale label collection and the two bonded over a span of seven days. Suddenly, when Ban was away, she quietly whispers that she wished that he had come to steal her instead of the Fountain of Youth. She was startled to discover Ban behind her and to have heard what she said, and to realize that they both had the similar thoughts and feelings.

Out of the blue, a mysterious monster from the Demon Clan appears, burning the forest with its Purgatory Fire. Ban immediately confronts the monster after telling Elaine to escape with the fountain, and successfully robs one of its hearts. Not realizing that it had more than one heart, he lets down his guard and as a result, both of them gets severely injured by the monster.

Both of them realizes that the only way to survive was to drink the Fountain of Youth, which means that only one of them could live. The two of them wanted each other to drink the fountain, hoping for their survival. In desperation, Elaine seemingly drinks the liquid, only to kiss Ban and deliver it to him directly. Ban immediately recovers from the injuries after consuming the liquid, and quickly defeats the monster in rage. Before passing away in Ban's arms, Elaine gives him the forest's last seed.

Later on, somewhere within the Kingdom of Liones, Ban is judged and sentenced to death for his apparent sins of destroying the Fairy King's Forest, taking the Fountain of Youth and killing the Guardian Saint. As the captain of the guard asks Ban if he has any last words before execution, Ban tells everyone present that he is no longer "Bandit Ban", but "Undead Ban" is now his name.

Retrieved from "https://nanatsu-no-taizai.fandom.com/wiki/Side_Story_1?oldid=149986"
Community content is available under CC-BY-SA unless otherwise noted.