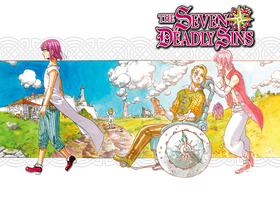 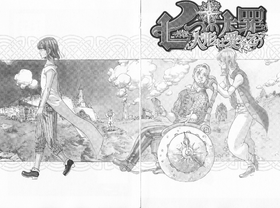 The Doll Seeks Love「人形は愛を乞う, Ningyō wa Ai wo Kou」 is the fourth Side Story of Nanatsu no Taizai manga.

Gowther awakens in what seems to be a cave. Soon after is approached by a girl, and they are both startled by each other. The girl, who introduces herself as Nadja, recovers soon from the initial fear, and tries to reassure Gowther (who, in the meantime, tried to hide behind a rock) of her good intentions. Talking with her Gowther discovers that the place they are in are the cellar of Liones castle. Nadja then realizes that she lost track of the time, and begins to leave the cellar. Gowther is, however, saddened of her leaving and asks her not to be left alone. After Nadja promises that she will come back, Gowther happily smiles.

After Nadja left the cellar, Gowther begins to wonder where he may be. He does not know about Liones nor the other kingdom Nadja mentioned, Danafor, and the cave he is in seems to be cramped with slabs of stone and giant roots. Touching the roots Gowther realizes he is where the Fairy King's Forest once stood, and that he was there for 3000 years. He then stumbles into Gowther's wheelchair, and the dried up corpse of the demon himself. Remembering his creator's final words, gifting him the task to fulfill his dream, Gowther breaks in tears.

After a while Nadja - who, in the meanwhile, met his brother Bartra and told him about Gowther - comes back, bringing a gift. Remembering how Gowther died just after giving him his first and only gift, Gowther states that he do not need it, because he do not want Nadja to go away. Nadja reassures him that she will not go away, and gives him her most precious treasure: a book. While she explain that books are her only way to break from the castle, since her frail body does not permit her to travel, Gowhter reads the entire book. To explain Nadja a point of the book that bugs him, Gowther uses his power to make his hair grow and change color. Nadja asks him if he is a magician, and Gowther answers that he is not human, but a doll. To make her understand he opens his own chest and shows her his magic heart, having the girl collapsing from fear.

She then awakens in her room, with Bartra near her bed. He asks her wath happened and if Gowther did something to scare her. She explains what happened and tells him that she is both scared and drawn to Gowther. The doll then appears from behind a curtain, dressed like a maid. Bartra explains that Gowther brought her back from the cellars, and that he made him dress like this to slip inside the castle. From that point on Gowther becomes Nadja's maid, and both Bartra and Denzel notes that she is happier since Gowther is with her.

After some time, while Nadja is stuck in bed due to her conditions, Gowther confronts her. He noticed that, since their first encounter, her heartbeat grown weaker every day. Crying, he tells her how his creator died before him. He tells her that he asked him to fulfill his dream, without saying what the dream was. Nadja tells that she is sure that he already fulfilled his "father"'s dream, by seeing, hearing and touching the world. The two then kiss and make love, but right after the intercourse Nadja passes away with a smile on her face, thinking that he fulfilled also her dream.

Gowther screams in agony, and tries to replace Nadja's heart with his own, but invain. His screams however alerted the guards, that finds him over Nadja's corpse, both naked and with the girl's chest open. Seeing the gory scene the guards apprehends him, and Gowther is sentenced to death for raping and killing the princess, driven by Lust. With his final thoughts, Gowther discards his own heart states that he want to live like a plain doll, to never feel again that pain.

There were no fights or events.

Q204: Lambda-san (Kumamoto Preferecture): Can you please give me recommendations of manga you've read that you've liked recently?

Q205: Kamekichi-san (Hokkaido): Do you get to name magic yourself?

Nakaba: Either you or the teacher that taught it to you.

Q206: Miffy-san (Tottori-Prefecture): Where did Ban live in his Holy Knight days?

Nakaba: He lived in the same Holy Knight barracks as Meliodas and the rest of them.

Q207: Naa-chan-san (Ooita Prefecture): Will Diane's parents ever appear in the story?

Nakaba: They're dead, so I don't think they're going to showing up any time soon. Probably.

Q208: The Boar's Hat-san (Kagawa Prefecture): Who created the uniforms for the Boar's Hat inn?

Nakaba: Apparently Meliodas commisioned a tailor to make them.

Q209: Cheese-san (Okayama Prefecture): Can Estarossa use all of Meliodas' abilities?

Nakaba: Only the ones that are specific to the Demon Clan (like Helblaze).

Q210: Hakida-san (Tochigi Prefecture): If Cath and Hawk were to fight, who would win?

Q211: Hendi Lover-san (Miyagi Prefecture): Hendi always seems to be playing the comic relief... but it is because he's really just a ditz?

Nakaba: Yup, he's a total airhead. He's not trying to be funny at all.

Q212: Nade-san (Miyagi Prefecture): What are your favorite colors?

Nakaba: As much as it would appear so, Sariel is older.

Q214: Jaxon-san: Why did you choose to make Meliodas a young man?

Nakaba: Would he has been better off as an old fart? (lol).

Q215: Fufu-san (Germany): If they're supposed to be the Goddess Clan, then why are the highest ranking people all men?

Nakaba: The head of the Goddeses is female!

Q216: Marumaru-san: When you decided you wanted to become a mangaka, what did your family said?

Nakaba: "Do whatever the heck you want" (lol)

Nakaba: It's more comfortable working by myself. I'm terrible at communicating with other people. Guess which it is? (Answer: Both)

Last Page of the Side Story