The King Sings in Loneliness 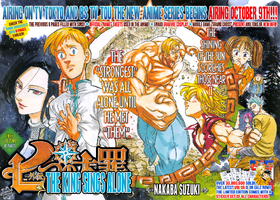 The King Sings in Loneliness「王は孤独に歌う Ō wa Kodoku ni Utau」 is the fifth Side Story of Nanatsu no Taizai manga.

In the Kingdom of Liones, Escanor is in trial for his crimes. Meliodas steps in with the intention of making Escanor a member of his group. Meliodas challenges Escanor to a duel upon which if  Meliodas wins, Escanor has to join the Seven Deadly Sins.

Q354. Kōhei-san (From Miyazaki Prefecture): Did you think about the content of the gaidens from the beginning? Or when the occasion presents itself?

Nakaba: Mainly the latest. I decide on the development in one way or another.

Q355. Kurumieru-san (From Mie Prefecture): Is Merlin's adult look how child Merlin has idealized it?

Q356. Yūka-san: Ban is no longer immortal now, but roughly how much lifespan does he have left?

Nakaba: He became immortal when he was in his 20's, so it'd just pick up from there.

Q357. Buta no Bōshi-san (From Kagawa Prefecture): Are Powers inherited?

Q358. Yue-san (From Ishikawa Prefecture): Has Helbram ever been in love?

Nakaba: He didn't really know much about stuff like that.

Q359. Nonimotorara-san: When a reincarnated Elizabeth regains her memories, are they just her Goddess memories? Or does she regain the memories of all her past reincarnations of Elizabeth as well?

Nakaba: She has all her memories.

Q360. miffy-san (From Tottori Prefecture): What does Elaine think of Ban's facial hair?

Nakaba: Probably strong enough to get near Hawk Mama's.

Nakaba: He was probably evil to begin with. Though I think maybe that was all an act. But when we'd meet up for drinks he'd start to talk about this and that and get kind of honest... and that evil personality of his has been revealed as... Ahh... Stooooop!! That was all a lie... Please, don't era...

Q364. Rio-san (From Niigata Prefecture): Please, secretly tell me what you think of your boss.

Nakaba: He's the best friend and drinking buddy I could ask for (though I don't know what he thinks of me).

Q365. P-san (From Nagasaki Prefecture): When did Meliodas meet Merlin?

Nakaba: Actually, it was before he met Elizabeth.

Q366. Tara-san (From Saudi Arabia): Does Diane still hate how large she is?

Q367. Yashimoda Yūsuke-san (From Tochigi Prefecture): Have you played any other mobile games apart from Grand Cross?

Nakaba: Nope. 'Cause I'm afraid of the internet... so I don't wanna mess with it and screw up.

Retrieved from "https://nanatsu-no-taizai.fandom.com/wiki/Side_Story_5?oldid=134834"
Community content is available under CC-BY-SA unless otherwise noted.