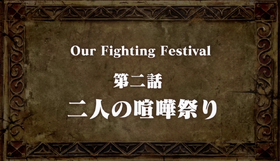 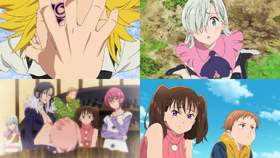 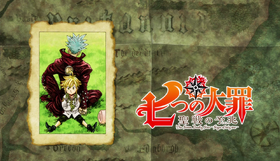 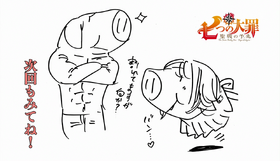 Our Fighting Festival「二人の喧嘩祭り Futari no Kenka Matsuri」 is the 2nd episode of the Signs of Holy War arc and was first broadcasted on September 4, 2016.

Ban and Meliodas meet to continue the duel the left unfinished before, only find that Hawk has told everyone about their solemn battle.

Ban walks up to a mountaintop to finally settle matters with Meliodas, but the former is surprised to see Elizabeth and Hawk as well as the other members of the Seven Deadly Sins and the Holy Knights as part of an audience. Merlin casts a gigantic cubic barrier around Meliodas and Ban in order for the spectators to safely watch the fight. Meanwhile, King and Howzer have their own fight to win the attention of Diane. Ban initiates a brutal attack on Meliodas that somehow weakens most of the spectators. The fight ends in a stalemate after the two of them exchange rapid punches that cause the barrier to break. They remain friends and head back down to the Boar Hat for a drink.

Meanwhile, in another location, the man appearing to be Dreyfus is walking through the rain. He recalls the boy telling him the arm appeared to have come from Liones. When asked where he thought the arm was going, the boy, comforted by the presence of his father, says it was likely Zhuhur Valley. The man thanks the boy and kills him and his father so they cannot repeat the story.

Retrieved from "https://nanatsu-no-taizai.fandom.com/wiki/Signs_of_Holy_War_Episode_2?oldid=125518"
Community content is available under CC-BY-SA unless otherwise noted.