In Pursuit of First Love 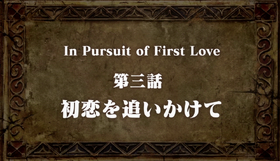 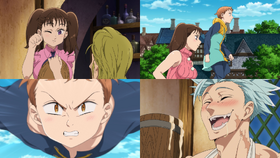 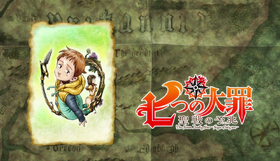 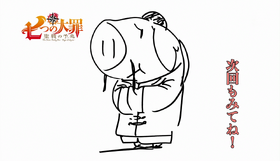 In Pursuit of First Love「初恋を追いかけて Hatsukoi wo Oikakete」 is the 3rd episode of the Signs of Holy War arc and was first broadcasted on September 11, 2016.

King is overjoyed to spend the day of the festival with Diane, but he's struggling to figure out how to take the next step.

King still hesitates to confess his feelings for Diane. Meanwhile, Diane leaves the Boar Hat and heads to a construction site in town, recalling the devastating collateral damage she caused due to her immense size. The construction workers there apologize to her and thank her for saving the kingdom. When King comes to see Diane, the two decide to play a game of tag across town. Outside a church, a wedding ceremony is interrupted by a remaining blood-awaken demon, in which Diane and King combine their skills to defeat the demon. King asks Diane if she regained her memories, and she answers him with a kiss on his cheek. The moment is ruined when a brick suddenly falls on his head, and he later wakes up next to her, having forgotten what he did during the day.

The winged arm reaches Zhuhur Valley and coughs up the Coffin of Eternal Darkness before dying. Close to it, Hendrickson is revealed to have survived Meliodas' Revenge Counter, but leaving him nearly as dead, tries to reach for the artifact. He collapses before he can reach it, seemingly unable to fulfill his objective.

In a dream, Hendrickson awakens in his human body, unharmed. With him is Dreyfus. Unbiddingly, Hendrickson starts crying as he had done so much he could never be forgiven for, some of which involved and he just wanted to die. He asks why Dreyfus would not just let him go. In response, Dreyfus kneels beside him and bites his arm, letting his blood fall into Hendrickson's mouth, revitalizing him.

Hendrickson awakens, wounds fully healed. Nearby, Dreyfus, with a strange mark on his face, drops the bandage stained with Elizabeth's blood, that he got in his previous fight with Hendrickson. With the blood of the Apostle of the Goddesses, Hendrickson now has all the ingredients to revive the Demon Clan.

Retrieved from "https://nanatsu-no-taizai.fandom.com/wiki/Signs_of_Holy_War_Episode_3?oldid=114364"
Community content is available under CC-BY-SA unless otherwise noted.