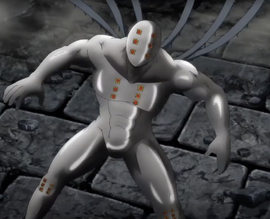 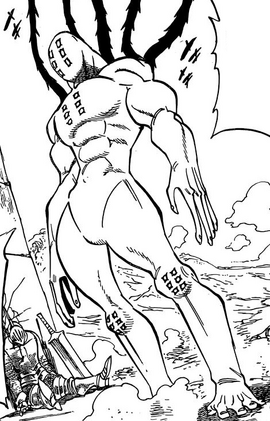 Silver Demons「銀色魔神 Gin'iro Majin」[1] are a family within the Demon Clan.

They are humanoid demons with toned bodies and no facial features besides six red circles. They have also that pattern on the chest as well. As the name suggests, they are silverish in color.

Memories of the Holy War arc (anime only) Edit

A Silver Demon is seen terrorizing Pelliot's village next to various other demons. When the Seven Deadly Sins appear, Merlin attacks the Silver Demon with her Random Ball, but the demon uses his tentacles to absorb her attack and use it to get stronger. Then, Merlin uses Purgatory Venom, and when the Silver Demon absorbs it, his body gets infused with a deadly poison that ends killing him.

When the Holy War is unleashed, a Silver Demon is faced by the Defensive Force in the east gate of Liones. The demon ends with the entire Griamore's squadron. Griamore tries to defend himself using his Wall, but the demon manages to break it and pierce his body with its dark tentacles. There, Dreyfus appears and manages to save Griamore from the demon using Full Size.

Silver Demons are very strong, as a single one was able to take down the entire east division of the Defensive Force. They can sprout black tentacles from their backs that they can use as weapons, having enough strength to pierce through Griamore's Wall. With these tentacles they are also able to absorb the magic of an enemy attack and incorporate it into their bodies to strengthen.[2]

Retrieved from "https://nanatsu-no-taizai.fandom.com/wiki/Silver_Demons?oldid=132430"
Community content is available under CC-BY-SA unless otherwise noted.