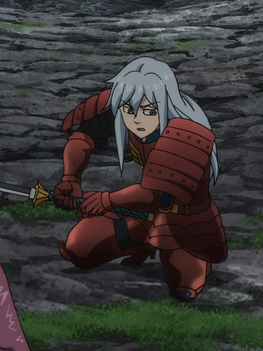 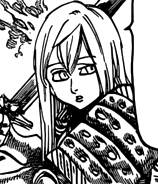 Simon「サイモン」 is a Holy Knight and a member of Dawn Roar.

Simon is a youthful individual who is sometimes mistaken for a girl because of his relatively small stature and straight long hair.

Simon wears a set of full body armor which makes him look more like a samurai than a knight.

Simon is a calm man, and very patient if necessary, as shown as when he waited for his "prey" to attack. Simon is probably competitive, as he dislikes the idea of someone else killing his intended "prey".

Not much is known of Simon's history but at some point of time, he joined the newly-formed Dawn Roar after the Seven Deadly Sins split up 10 years ago.

Simon and Dawn Roar are ordered by Helbram to travel to Ordan where a local knight spotted the Armor Giant in the forest. Dawn Roar bring along a group of knights, which are beaten and killed by the Armor Giant. They identify the Armor Giant as the Seven Deadly Sins member Gowther. Simon asks Hugo if he knows Gowther, and Hugo responds that he has seen him on the wanted posters before. Slader orders the group to make a stand-off against "Gowther" and attack when he makes a move. Slader and the rest wait for half an hour until Pelliot comes to them (which annoyed Simon) and, thinking that he is a dangerous criminal, attacks "Gowther."

"Gowther" is about to smash Pelliot but Armando pushes Pelliot out of harm's way, sacrificing himself. Slader and the rest know that now is the time to attack and jump "Gowther." As the battle begins, King petrifies Hugo with his Chastiefol Form Three: Fossilization. Simon saves Hugo by cutting his arm off, stopping the petrification, at his teammate's request. Simon heads toward Meliodas to stop him from saving "Gowther." When the air clears up, Simon is surprised that Meliodas is the captain of the Deadly Sins, due to his height and appearance. Simon is later upset when Slader accepts Gowther's offer to take the head of the Armor Giant. He had wanted to take Gowther's head but Slader tells him to stand down.

Entering the king's bedchambers, Simon and the other Dawn Roar members witness Slader's valiant attempts to save the royal family, but Vivian's Perfect Cube spell impedes him. Bartra orders Dawn Roar to stop Slader, and they comply. Despite all this Slader refuses to leave Bartra, even with the rest of Dawn Roar pulling him away.

When the Seven Deadly Sins and Dreyfus' group suddenly appear out of nowhere via Merlin's teleportation, Simon and his teammates become alarmed and ready their weapons. Simon reprimands Gowther for laughing at Slader's inability to break Vivian's Perfect Cube, even though Slader tells Gowther to laugh at this. After Bartra is freed, Simon and Hugo obey the king's orders to treat Slader's wounds and witness Dreyfus' confession of murdering Zaratras 10 years ago.[1] Later, Simon supervises Dreyfus' arrest and expresses shock when he sees King Bartra cough up blood. Suddenly the castle is destroyed by Hendrickson, nearly killing everyone inside, but Simon is saved by Chastiefol's Form Two, Guardian.[2] Simon later appears in front of Merlin's old castle as he is ready to face Hendrickson with the Deadly Sins. When Hendrickson appears with a new form and starts killing some Holy Knights, Simon steps in and uses Stance Sword "Ring" to slice around Hendrickson. This sends Hendrickson flying towards several other Holy Knights as they combine their powers to try to defeat him, but this ultimately proves to be no use.[3]

At the National Foundation Day Festival, Slader and Simon mourned the deaths of their comrades at the morgue where their corpses were placed.

When the Ten Commandments invade Liones, Simon finds himself next to Slader and the other Holy Knights trying to protect the kingdom. However, Simon falls with everyone under Estarossa's Love commandment, losing all his strength to fight. Simon then witnesses the fight between Escanor and Estarossa, his armor is melted by the immense heat of the Lion's Sin.

When Estarossa is taken out of the kingdom, Simon and Slader offer to gather all the remaining Holy Knights in town to protect the citizens while Howzer and the others are busy evacuating the royal family. However, the knights appear low in control of Zeldris's Piety commandment and attack them.

Simon goes with the knights to the castle to try to evacuate everyone, but they are stopped by Fraudrin and Grayroad. Although everything seemed lost, Merlin appears and manages to capture Grayroad. There, Simon is taken with everyone in the castle in Merlin's Perfect Cube and witnesses the battle between Meliodas and Fraudrin.

When the Holy War is unleashed, Simon protects with Slader the northern gate of the kingdom to replace Hendrickson in the "Defensive Force". Together with their companions, all manage to eliminate the demons that appear.

When a rain of rays of light and darkness begin to fall on the kingdom from another distant battle, Slader and Simon helps to evacuate everyone from danger.

With the end of the Holy War, Baltra still complains about all the tragedies and families and friends who were lost. When Slader and Simon assure him that Dawn Roar will take care of the repair and restoration of the kingdom, Baltra asks them to join him in the celebration of that night. Simon tries to reuse himself for another mission they have to attend, but Slader hits him and assure to obey the king's wishes.

Slader and Simos attends the celebration in the new Boar Hat.

As a member of the Dawn Roar, Simon is shown to be a powerful and skilled Holy Knight, being able to harm the Armor Giant in swift and deadly attacks.

Simon works well with his teammates.

Retrieved from "https://nanatsu-no-taizai.fandom.com/wiki/Simon?oldid=132374"
Community content is available under CC-BY-SA unless otherwise noted.