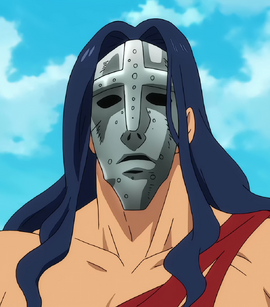 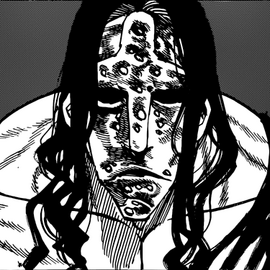 Slader「スレイダー」 is a Holy Knight and the captain of the infamous knight group Dawn Roar, known for their relentlessness to complete any mission they are assigned.

Slader is a quite tall man with long, dark blue hair that is unkempt and reflects his general appearance. He wears an iron mask with a stern expression. Slader wears a ripped red shirt which only covers his chest area, and a pair of black jeans, he is protected by only his armored pink gloves and gray boots.

During the time when he was kidnapped by savages, he wore nothing but a piece of cloth and had scruffy long hair. After he was saved by King Liones, he adorns a collared shirt and a proper set of clothes.

A natural leader; Slader was shown to have great patience, both when dealing with a dangerous enemy or instructing his less experienced comrades. When undergoing a mission, Slader is entirely focused on achieving success at any cost. His tenacity to see the mission reach completion is shared with the other members of the Dawn Roar, best shown when they stood motionless for over half an hour in wait for the Armor Giant to strike. Willing to risk his own life and the life of his comrades, he is shown to be both fearless and excited when in battle, though is more than prepared to retreat when the mission objective is reached. Slader is usually a kind man who uses very feminine terminology. He is compassionate and caring to others and gets along well with many others such as the Seven Deadly Sins and Elizabeth Liones.

Before he could even remember, Slader, who was nameless at the time, was kidnapped by barbarians and was treated like a dog as he grew up and could have been killed at any moment if he stepped out of line with them. In order to survive, Slader would watch barbarians as they fought one another and take notice of how they engaged in combat. Eventually, he awakened his power "Overpower" as he scared off two savages. When he was nearly hunted down and about to be killed, he was saved by King Bartra Liones. The king took him in and raised him, having taught him what is to be human and named him "Slader", earning the latter's complete loyalty and devotion to the king of Liones.

At some point of time, Slader and Hugo accompanied King Bartra on his way to Camelot on a meeting with king Uther Pendragon. There he and Hugo patiently waited for their king who was having a conversation with a young boy who would later become the new king of Camelot.

Ten years later, Slader would later become the captain of the newly-formed Dawn Roar to replace the Seven Deadly Sins after they were supposedly disbanded.

Even among the Holy Knights, Slader is noted to be very powerful by Meliodas and a highly capable combatant. Slader has a high degree of strength as he was able to lift and swing his large weapon with ease.

He wields a jagged, saw-like blade in battle.

While there wasn't much interaction between the two, Slader and Hugo did work together for a number of years, working together since at least the time King Bartra met a young Arthur. After hearing Hugo and his fellow Dawn Roar teammates' deaths, Slader mourned for him.

Out of all the Dawn Roar, Slader appears to be the closer to Simon and fight along well with one and another, despite the two share different ideas about being a Dawn Roar Holy Knight.

Slader holds Gowther in high respect since the first time they met and see him as a form of a rival. Slader wanted to fight Gowther out of the rest of the Deadly Sins before learning that the sins did not actually betray Liones. Slader has shown to have some romantic interest in Gowther [1]. Slader was put in charge of watching Gowther in his doll form, and was also seen affectionately dressing Gowther after the sin turned back into his human form.

While the two haven't had any noticeable interactions, it is shown that Slader has gained much respect and admiration for Merlin after she freed Bartra and Elizabeth with ease using her Absolute Cancel ability, while he was unable to despite great effort and injury. He also refers to her as "Big Sister."

After Bartra gives Slader food, water, and a place to live, Slader swears total loyalty to Bartra and becomes one of the King's greatest knights. Slader would even sacrifice his own life in order to save Bartra and even get touched by the King's kindness.

Even after Meliodas succeded Bartra, Slader, though, remaining loyal to Liones, still considers Bartra as his king. Being by Bartra's side, seemingly acting as his aid due to the former king's old age.

Retrieved from "https://nanatsu-no-taizai.fandom.com/wiki/Slader?oldid=154372"
Community content is available under CC-BY-SA unless otherwise noted.