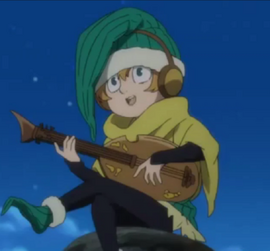 Solaseed「ソラシド Sorashido」 is a troubadour who joined the Great Fight Festival for an unknown purpose.

Solaseed is a very short young girl who wears a cap, coats, and carry around a lute with her.

After being under the possession of Sariel of the Four Archangels, Solaseed abruptly developes into a slim young woman with long hair.

Not much is really known of Solaseed's personality yet so far, she appears to be more focused on making a song with her lute as she watched many would-be participants die in horrible ways by the Earth Crawlers. She also seems to be careless with herself as she wasn't concerned at all when she was at Vaizel festival even though she would have died eventually in the ongoing battles if it were not for Escanor.

After accepting the invitation to the Great Fight Festival at Vaizel, Solaseed entered the labyrinth where she later sat on top of the highest wall and sang a song with her guitar at the carnage and massacre of many participants by the mercy of the Earth Crawlers.

Solaseed manages to reach the end of the labyrinth where Drole and Gloxinia receives all the participants. There, Solaseed states how Gloxinia kills all the other who still in the Labyrinth, claiming that all the life there is vanishing. When the tag teams are formed, Solaseed is paired with Howzer.

Solaseed is taken as hostage by Drole along with everyone besides Meliodas, and later teleported to Liones by Gilfrost.

Solaseed reappears, with her body under possession of Sariel, one of the Four Archangels, to help the Holy Knights fight against the demons.[1]

It is revealed by Sariel, that some time after the Great Fight Festival, Solassed fell victim to a serious illness that put her on the verge of death. There, the Archangel manifested through her lute and offered to cure her illness in exchange for her allowing him to use her body to fight the demons. In the end, Solaseed agreed. Sariel then left Solassed's body after she grew, having healed her illness and recovered enough of his physical body to use it, as he is bound to fulfill the end of the deal.

Solaseed's equipment consists of a lute that she is always carrying with her. One of the Four Archangels of the Goddess Clan, Sariel, rests inside.

It also appears that Solaseed was skilled enough to traverse the labyrinth filled with dangerous traps and monsters like the Earth Crawlers with ease, being one of the people who reached the end of the maze, and also climbed up on the highest wall just to play her lute without suffering any repercussions at all, unlike Diane had when she tried a similar action.

Retrieved from "https://nanatsu-no-taizai.fandom.com/wiki/Solaseed?oldid=150362"
Community content is available under CC-BY-SA unless otherwise noted.