Start a Wiki
watch 01:38
Who is the Supreme Deity?
Do you like this video? 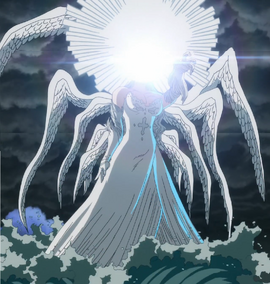 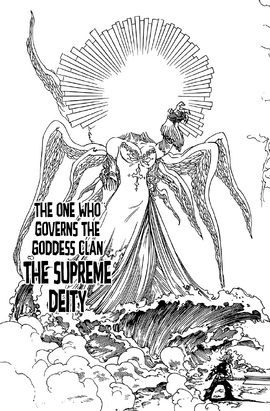 Ruler of the Goddess Clan

The Supreme Deity「最高神」 is the ruler and creator of the Goddess Clan, as well as the one who granted the Graces to the Four Archangels. She also is the mother of the original Elizabeth.

She is a slender woman with ten wings in total, equal to or bigger than a giant in stature. She has pale skin and long light hair, but her face appears obscured by a bright light.

She wears a white dress with a cross symbol in the middle, some type of gauntlet on her hands, and a halo.

Like the Demon King, the Supreme Deity is fully devoted to her clan and thus is fully willing to punish any of her subjects should they go against the laws, including her own daughter. Due to her ruling status, she hates being deceived, furiously killing the inhabitants of Belialuin along with the Demon King when Merlin betrayed her and took her gift without putting at her side.

It is unknown if her clan's gentle attitude in general except for demons comes from the Supreme Deity or not, but she was willing to cooperate with the rest of the clans to defeat them. It should also be noted that she did not immediately punish Elizabeth despite her already being with Meliodas before she saved the Commandments, suggesting the Deity was, even if reluctantly, willing to tolerate their relationship as long as Meliodas was an ally to the Goddess Clan. While harsh in her judgment and rule in regard to the laws of the Goddess Clan, the Supreme Deity is willing to forgive her subjects or at least her child if they redeem themselves and abide to the laws of the clan again, according to Ludociel.

Despite her issues with the Demon King, she has worked with him in the past, as when they joined to destory Belialuin and punish Meliodas and Elizabeth, as well as when they joined forces to seal their creator, Chaos, away out of fear and envy of it's immense power.

The Supreme Deity was created by Chaos along with the Demon King and the Sacred Tree after the world was given birth by Chaos. The Supreme Deity then created the Celestial Realm and the Goddess Clan in her image. However, when Chaos created the humans, the race closest to it and its favorite creation, both the Supreme Deity and the Demon King were filled with jealousy and apprehension, fearing that the love and respect that their own respective races gave to them would be stolen by their own creator, Chaos. Thus, the two gods joined together and sealed Chaos away, allowing them to be the most powerful entities in the world.

The Supreme Deity's army constantly clashed against the Demon King's, but their forces were too equal in power and thus a fragile treaty of peace was formed despite their opposing natures. However, the peace was unfairly broken by her own subjects, who even slaughtered innocent members of the Demon Clan. Whether she was involved in this case or not, these actions made both rulers fall in rivalry again.

After the betrayal of the leader of the Commandments Meliodas for his alliance with his lover, her own daughter Elizabeth, and the death of two of the Ten Commandments at the latter's hand during his escape, her clan instigated with the humans, Fairy, and Giant Clan in order to finally defeat the Demon Clan. These events were known as the Holy War, though the Supreme Deity's feelings towards her daughter's actions are unknown.

Around this time, news of a miraculous human girl from Belialuin who possessed infinite magic soon spread to both the Celestial Realm and the Demon Realm, resulting in the Supreme Deity trying to persuade the girl to join forces with the Goddess Clan in help defeating the Demon Clan, along with the Demon King doing the same. When the girl told them she would follow the one who gave her the better gift, the Supreme Deity gave her resistance to dark curses, including the Commandments of the Demon King. However, when the girl deceived them by taking both their blessings, the Supreme Deity and the Demon King in their fury destroyed Belialuin by making it rain fire and lightning and unleashing poison mists and fogs upon the land completely annihilating Belialuin and its inhabitants.

During the last few days of the Holy War, the Supreme Deity and the Demon King had lost their patience of their children's repeated defiance of the laws of their clan, such as saving the lives of two Commandments in the middle of a war on Elizabeth's case. The former rivals decided to work together, fighting against Meliodas and Elizabeth, effortlessly killing them and cursing them for eternity.[1] The Supreme Deity cursed Meliodas with immortality as his punishment, reviving him every time he died, in exchange for his emotions being consumed more and more by the Demon King until his son would return to be the bloodthirsty demon he once was.

As their ruler, the Supreme Deity is terrifyingly powerful, being the most powerful goddess in existence. A testament to her immense strength is having ten wings that further indicates her strength is far above all other goddesses, as the most seen are four wings possessed by the four Archangels and the original Elizabeth. According to Meliodas, she is the only known being who is equal in power to the Demon King. As Meliodas stated only herself or the Demon King or someone as powerful or superior to them in power can lift the curses that he and Elizabeth were cursed with, showing further testament to her immense power. While she rarely fights, the Supreme Deity's might in battle is terrifying, as evidenced by her ability to easily overpower and kill Meliodas in the Holy War of which Meliodas claims that he was utterly powerless to fight back against Elizabeth's mother. Despite her godliness and immense strength, her power isn't absolute as she is surpassed by Chaos, who created her alongside the Demon King and the Sacred Tree after the world was created. It took her power combined with the Demon King, her archenemy and equal in power, just to seal away their creator, which suggests her power is nowhere near her creator's own.

Elizabeth is the daughter of the Supreme Deity, inheriting part of her power and often supporting her Archangels. Most of their relationship is unknown, such as her reaction to Meliodas' betrayal to his clan for her daughter, but not interfere with their relationship for a considerable length of time, so it can be assumed that she even if reluctantly, allowed her daughter to be with Meliodas after he became an ally of the Goddess Clan in the War. However, their relationship grew bad enough when Elizabeth saved the lives of two Commandments in the middle of a war, making the Supreme Deity incredibly furious and had no qualms on personally killing and cursing her daughter as punishment for her actions.

Despite constantly forgetting their past, her mother's actions evidently made Elizabeth resent her greatly, making their strained and antagonistic relationship mutual. However, Ludociel has said that the Supreme Deity might revoke the curse if the current incarnation should side with the Goddess Clan, implying that she still to an extent considers Elizabeth her daughter and would welcome her back should she return to the Clan and follow their laws again.

Despite being mutual enemies as leaders of opposing clans, they are capable of working together when the situation demands it. Such as when they teamed up to seal away the Chaos, and later, punish their children during the Holy War for their continued defiance to the laws of their respective clans, and when they destroyed Belialuin together when they were deceived by one of its inhabitant.

Though she is not fond of him, especially since he is not only the son of her arch-rival but the demonic love interest of her daughter, the Supreme Deity has been shown not to have a special hate for Meliodas as she does with other demons including the Demon King but seeing as how she was willing to accept him on her side of the Holy War and tolerate his relationship with her daughter prior to them saving Monspeet and Derieri. It shows that at most she simply has an enormous dislike to him for being her sworn enemy's son and causing her daughter to stray from her strict teachings.

Though her relationship with her creator is never shown, it is known that she was afraid that the love and worship her creations, the Goddesses, devoted to her would be stolen away by her own creator. She was scared enough of it that she was willing to work with the Demon King, despite being mutual enemies, to seal away their own creator in order to allow them to be known and revered as the most powerful entities in the world.

Retrieved from "https://nanatsu-no-taizai.fandom.com/wiki/Supreme_Deity?oldid=150016"
Community content is available under CC-BY-SA unless otherwise noted.