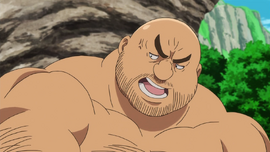 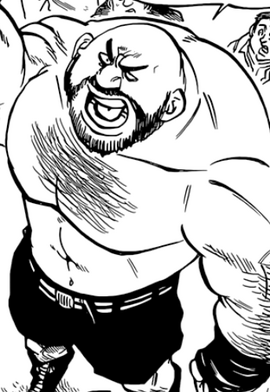 Taizoo「タイズー」 is a mountain bandit-turned merchant, and a three-time champion of Vaizel's annual fight festival.[1]

Taizoo is a tall, very muscular man with a shaved or bald head. His attire is similar to a boxer's, with no upper body clothing, trousers, and gloves without fingers.

Taizoo is very irascible and often uses violence on individuals that anger him. Despite that, he is humble enough to admit that he couldn't even beat a Holy Knight himself in a fight. Taizoo has shown concern for children's lives as he tried to warn Meliodas and King, whom he thought them to be children by appearance, to not participate the fight festival and get hurt in a stern manner. In the anime, he carried several children away to safety when the Holy Knights attacked Vaizel.

In his time as a mountain bandit, Taizoo once encountered a Holy Knight and lost in battle. Sometime later he became a merchant. At some point of time, Taizoo participated in the Vaizel Fight Festival and won three times.

When Meliodas and King enter the fight festival in Vaizel, Taizoo, believing that the two are children, perceives their joining the tournament to be them lowering its level, which angers him, with him lifting both of them with a single hand and commanding them to leave before they are hurt. Howzer, however, easily lowers Taizoo's hand, while stating that age does not matter in a festival[2], resulting in the ex-mountain bandit having a grudge on the Holy Knight.[3] During the preliminary, he is seen lifting other fighters with ease and flinging them off the ring, and smirking as the audience cheers for him.[4] After it ends, he is shown to be among the eight fighters who have survived the preliminary and have advanced to the main tournament[5], and after the drawing the lots that will determine his opponent in first round[6], is assigned to fight against Howzer.[7]

Taizoo is later seen during his battle with Howzer, which is soon revealed to have resulted in Taizoo losing heavily against an obviously much stronger Howzer but continuing to fight due to his ego, despite Howzer having used only a very tiny portion of his power, knowing that if he overused his strength even a little, he would kill Taizoo. As he persistently attacks Howzer, he is requested to surrender, with Howzer also adding that if was for his own benefit; Taizoo, however, refuses to do so. When he charges at Howzer once again, the Holy Knight, stating that while he does not want to use his abilities on an ordinary person, letting the battle continue any more would be bad for his opponent, uses his abilities to create what appears to be a small tornado around his arms, and sends the former mountain bandit flying out of the ring with a punch that is strengthened by said ability.[8]

Later, after Meliodas and Ban's battle, Taizoo, upon waking from his unconsciousness, discovers Cain to have carried him from the area where he landed following his defeat. Cain commends Taizoo for putting up a good fight, but the former mountain bandit retorts that it was certainly not so, and he had, from the beginning, known of the difference in his and Howzer's strengths, and of his opponent being a Holy Knight.[9] As the battle continues, and Love Helm comments that Matrona can only defend herself against Howzer's attacks, Taizoo commends her for even doing that, and adds that if she is caught within the twisters even a bit, she will be defeated, and that Howzer's attack was not something an ordinary human could withstand. Cain replies to Taizoo's statement that it was as if the defeated fighter has had an unpleasant experience with a Holy Knight; the latter admits to have had one with a Holy Knight from Danafor when he was young, and still a bandit.[10]

With Matrona cornered, Taizoo commends her for having been able to evade Howzer for so long, but is then extremely shocked when she blocks Howzer's attack with ease.[11] After the battle ends in Matrona's victory, Taizoo expresses his surprise at there still being people who could defeat Holy Knights. He looks on as Cain walks into the ring for his battle against Meliodas.[12] When, during their battle, Cain removes his shirt and reveals his shirt to be bearing Danafor's symbol, Howzer, now standing near Taizoo, wonders about Cain, with Taizoo answering that the man's attire is the traditional armor of Danafor's Holy Knights.[13] After this battle also ends, Cain walks towards the two, greeting and questioning them if they have more energy, which they affirm.[14] Taizoo then witnesses Diane and Meliodas' battle, in awe of their great strength. He, in shock, later looks on as Meliodas, after revealing his identity, threatens to massacre the citizens of Vaizel if they do not leave the town.[15]

In the anime, Taizoo took part of the evacuation of the town's citizens as he was seen carrying a group of children away to safety.

Several months after the battle between the Seven Deadly Sins and the Holy Knights, Taizoo became the new mayor of Vaizel and rebuilt it to its former glory. He also turned the massive boulder created by Diane into a brand new Fight Festival's ring with the help of his men under his payroll, thinking in name it after himself. However, two members of the Ten Commandments, Drole and Gloxinia who were seemingly interested in his idea, appeared before the surprised Taizoo and his men with intent to devour their souls.

While the rest of his co-workers' souls were presumably devoured, Taizoo was spared to become the referee of the Great Fight Festival as he was ordered by Gloxinia to make the formal introductions and tried to make a pumped-up speech only to receive a blank response from all participants listening much to his chagrin.

Taizoo, due to his huge muscular stature, is much stronger compared to an ordinary human.[16] However, he is still no match for a Holy Knight of Howzer's caliber.[17][18]

Retrieved from "https://nanatsu-no-taizai.fandom.com/wiki/Taizoo?oldid=150403"
Community content is available under CC-BY-SA unless otherwise noted.