The Seven Deadly Sins: Cursed by Light「七つの大罪：光に呪われし者たち, Nanatsu no Taizai: Hikari no Norowareshi Mono-tachi」 is the second movie based on the manga and anime series Nanatsu no Taizai. The movie was premiered in Japan in July 2, 2021.

"With the help of "Sin of Wrath" Meliodas and the worst rebels in history, the Seven Deadly Sins, the "Holy War", in which four races, including Humans, Goddesses, Fairies and Giants fought against the Demons, is finally over. At the cost of the "Sin of Pride" Escanor's life, the Demon King was defeated and the world regained peace. After that, each of the Sins take their own path; the first being the "Sin of Gluttony" Merlin, who works together with King Arthur aiming to create a new kingdom."

"Meliodas was traveling with Princess Elizabeth to a place of memories. Along the way, by chance he reunites with his younger brother Zeldris. Meanwhile, the wedding of King, the "Sin of Sloth", and Diane, the "Sin of Envy", was about to take place, at a blessed ceremonial hall, with the presence of the "Sin of Greed" Ban and the "Sin of Lust" Gowther as well. With the advent of Dianne in a dress, an eerie sound like the rumbling of the earth began to echo in the brilliant forest."

"Punish the Seven Deadly Sins that ruined the Holy War and those who contributed to it."

"Suddenly, an army of Fairies and Giants rushes to the land where peace should have come. Leading the enemy are the once missing "Second Fairy King" Dahlia and the "Giant Master Craftsman" Dubs. What is the purpose of the strange-eyed invaders ...?"

"Everyday life is destroyed by those who desire the chaos of the world. A terrifying conspiracy that threatens all races develops. What is the future ahead of the battle between light and darkness?! Can this cursed world have true peace? The fate of the fragile world is entrusted again to the reunited <Seven Deadly Sins>."

It contains a short Q&A section.

Q1: (Suzutti-san) Why does Meliodas' armor have the Goddesses' crest?
A: It's to make himself aware of Elizabeth.

Q2: (Resio-san of the Combatant Tribe) Tell me why Zeldris' sword has the Goddesses' crest!
A: He received it from Meliodas!!

Q3: (Koshiba Rinne-san) Who is the most doting parent between Meliodas, Ban and King?
A: All of them are, equally.

Q4: (Kotti-san) Who crafted Diane's wedding gown?
A: King did with love!

Q5: (Chanruu-san) Do Goddesses and Fairies ever get tired of flying with their wings?
A: It feels like walking or running for humans.

Q6: (Yuuki Kaji-san) To Nakaba Suzuki-sensei: I like Hawk, and also Wild. Both of them have the four-leaf clover mark on them... Apart from them, does Meliodas's partner that possess that characteristic exist? Can they speak the human language?
A: Hawk is the reincarnation of Wandle and was born in Purgatory! Only Hawk can speak it properly, because he's a strange creature of Purgatory.

Q7: (Pomupomu-san) Baccho-sensei, is there a scene or line that moved you?
A: I say this after drawing it but it's the part with Ban and Zhivago.

Q8: (RAIN@Nekokuma-san) Which character do you have the most trouble moving around?
A: Escanor. Because he's too strong.

Q9: (Kudou Miria-san) Which character do you dislike the most?
A: Kay, Arthur's adoptive brother. He has no good side to him right now?

Q10: (Tartar-san) How do you come up with kanji or ateji for the magics?
A: I play a stare-out game with the dictionary. (Laughs)

Q12: (Magnum Revolver-san) Are Meliodas and the others planned to appear in "Four Knights of the Apocalypse"?
A: They definitely will someday.

Q13: (Mae7ia.-san) Are you planning to visit Brittany in France someday?
A: I want to go to the signing event I had planned to!! 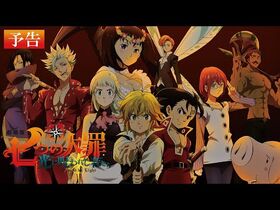