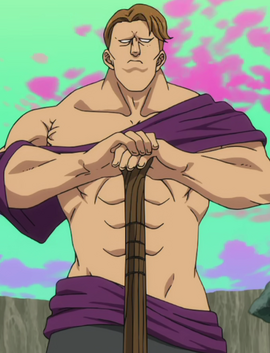 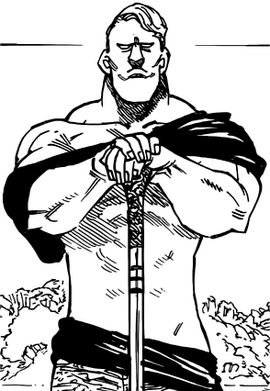 Protector of Head of Druids

Theo「テオ」 is a priest in the Druids sacred land Istar, serving as protector of the heads of the Druids.

Theo as a child
Theo is a large hulking young man wearing loose pants and few articles of clothes in his upper right body. He has no eyebrows.

Despite his intimidating appearance, Theo appears to be cheerful and happy as he greeted Meliodas in a friendly way and uses his large appearance to make sure that 'meanies' will take him and his fellow guardians' seriously.

Theo was a child when the trolls and their queen came and attacked Istar. He was sent to Liones to ask for Hendrickson's help, however, the Seven Deadly Sins came in his place and saved the Druids, but destroyed their altar by mistake. However, Theo ends up looking up to and admire the Deadly Sins for their action.

Theo eventually became a priest and protector of the heads of the Druids, Jenna and Zaneri.

When the Seven Deadly Sins and their friend entered Istar once more for training and to regain Meliodas strength, nearly everyone thought Theo was the head of the Druids, but to their surprise, he was the protector and fifteen years old, but was still very happy to see his old friends again. Theo and Jenna later took the group to the Cave of Training to train for their upcoming battle against the Ten Commandments.

Not much is known about Theo abilities, but Theo so far shown to be strong by his appearance and his title of priest and protector. Theo also hold a long staff for battle.

Retrieved from "https://nanatsu-no-taizai.fandom.com/wiki/Theo?oldid=135790"
Community content is available under CC-BY-SA unless otherwise noted.