Episode 3 (S3)
Tornado「, Tatsumaki」 is the Grace possessed by Sariel of the Four Archangels.

This power allows Sariel to control wind similar to Howzer's magical ability Tempest but much stronger. He can produce powerful gusts of wind to slice through or blow people away.[1] Sariel also can use this ability to create a wind-like sphere around him, which he uses for defensive purposes that shreds anything or anyone trying to get close to him into pieces. As a Grace, anything he shreds with this wind can't recover as was seen when Derieri's arm didn't regenerate from being shredded by the blessing (but surprisingly, Estarossa with Two Commandments could regenerate from his wind sphere and his Tsunzaku Kamakaze[2]). 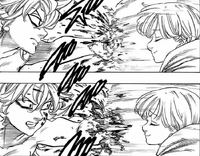 Tornado used as a barrier 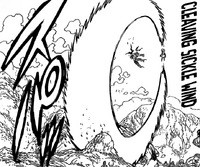