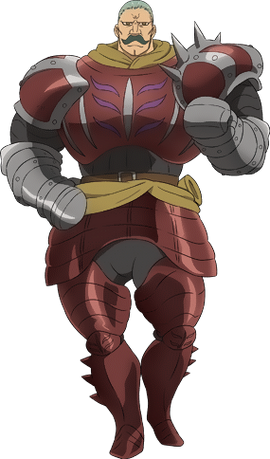 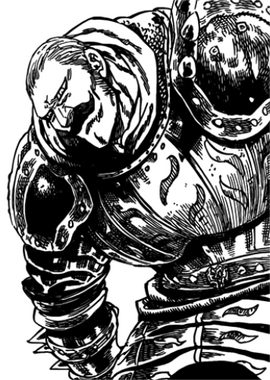 Twigo「ツイーゴ」 is an apprentice Holy Knight who was stationed near Kaynes Village. After his defeat by Meliodas, he, wanting to gain greater powers, drank the demon's blood, but died since he was incompatible.

Twigo is a very large man with a peculiar curly mustache and thick plucked eyebrow. He has a fairly ordinary buzz cut hairstyle and angular face.

Twigo is a ruthless and heartless man who doesn't care about his subordinates'[1] or the kingdom's princess'[2] lives. He is relatively self centered and regards his strength as superior to many others.

At some point of time, Twigo was on a training session with his older brother Kaide and complained that he couldn't do it anymore, but his brother berated Twigo of his lack of effort to become a Holy Knight and pressured him to train harder.[3]

Upon seeing Meliodas and Elizabeth, he quickly cut a part of the cliff they were standing on. Twigo then realized that he had not confirmed if they where the people in the report and said that they were confirmed as two unknown dead people. Some of the knights said that Alioni was under the cliff to which Twigo says that then there were three dead. When the knights says that the thing he had done was horrible, Twigo asks them if the death toll was seven, implying he would kill them for saying so. Just then, to his surprise, Meliodas jumps back from the cliff carrying everyone, including Alioni. This angers Twigo, since that changes his confirmed death toll. Although none of them looked like someone from the Seven Deadly Sins, he recognized Elizabeth as the kingdom's princess.[4]

Although there was a search order for bringing her alive, he says that an accidental death can happen, and while they where running, he swung his sword to kill Meliodas and Elizabeth, cutting everything in his path.[5] Elizabeth is saved by Meliodas, and moments later is saved again from another attack of Twigo, with which he cut the ground.[6] Getting close to them, Twigo swings his sword again, thinking that this time he for sure would kill them, but instead he is the one taking his own attack.[7] Hearing Meliodas' name, he realizes who he is, but do not want to believe it and swings his sword towards him again, only for his attack to be repelled, defeating Twigo and catapulting him into the sky.[8] As Twigo orders his subordinates to request for reinforcements, Hawk Mama, with the Boar Hat on her head, falls from the sky, blasting Twigo and his men away, and transports the establishment.[9] In the anime, he is shown reporting the situation to Gilthunder.

Twigo, along with Jericho, is later summoned by the Great Holy Knight Hendrickson, who states that he will give them new powers at a mysterious cave, to which they are guided by Guila and her master, Helbram, with their faces covered. There, the both are shown the corpse of a chained demon[10], with them being surprised to know that a demon was not just an object of folklore, but actually existed. They are then given its blood to drink, and are explained its power-enhancing qualities by the Great Holy Knight. Twigo is hesitant at first, but after remembering his defeat by Meliodas, he drinks it. He, however, is shown to be incompatible with the blood, and explodes due to it.[11]

As a Holy Knight apprentice, Twigo is much stronger than ordinary humans and knights. He is capable of slicing a large chunk of a cliff quite easily[12], and by swinging his sword, he is able to release a devastating slash that cut down everything in its path.[13] His sword attacks can produce a powerful blast of wind.[14]

Twigo don't care about his subordinates' lives, even threatening to kill them when they called his leaving Alioni to die a "horrible" act; they, in return, treat him with fear and respect.[15]

Retrieved from "https://nanatsu-no-taizai.fandom.com/wiki/Twigo?oldid=132384"
Community content is available under CC-BY-SA unless otherwise noted.