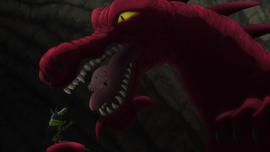 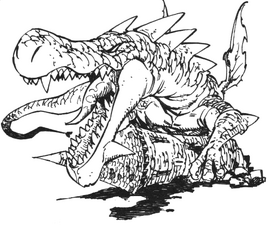 Tyrant Dragons「」 are wild creatures who can single-handedly level an entire Britannian Town. However, even ten of these creatures can't destroy the magical container barrier caused by the Eternal Seal Spell.

They are large dragons that have long heads and spikes coming out from the back of their heads and from the bottom of their lower jaw. They are also shown to have very well developed muscles.

They are wild and uncontrollable beasts.

Nothing is known of them yet except that they have destroyed towns throughout Britannia and the Holy Knights created a spell as a countermeasure to trap them and other powerful beings, such as the Seven Deadly Sins.[1]

They are first mentioned when Golgius invokes the Eternal Seal Spell and says that even ten of these creatures couldn't destroy the spell.[1] Howzer and Gilthunder arrive to stop the army of the Northern Barbarians on a flying dragon, which could have been a tyrant dragon.[2] In Ban's flashback of how he got the scar, the Seven Deadly Sins were resting after defeating a creature which could have been a tyrant dragon.

A Tyrant Dragon was in one of the training caves in Istar, where it is confronted by Hawk and Oslo. After eating Hawk, Hawk eats his way out from its stomach, awakening his power in the process.

They are next mentioned as prey to mature Earth Crawlers.[3]

They are said to be extremely powerful dragons who have the power to single handedly level entire towns.[4]

Retrieved from "https://nanatsu-no-taizai.fandom.com/wiki/Tyrant_Dragon?oldid=139145"
Community content is available under CC-BY-SA unless otherwise noted.