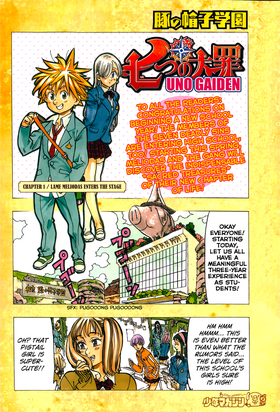 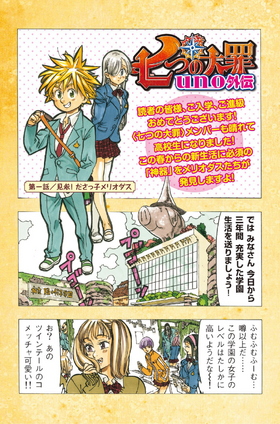 Lame Meliodas Enters The Stage「見参! ださっ子メリオダス Kenzan! Dasa-kko Meriodasu」 is the 1st chapter of the side story series, featuring the crossover between Nanatsu no Taizai and Uno.

Upon entry to the Boar Hat Gakuen, Meliodas plans to spend his three years being popular with girls. However, his lame messy hairdo causes girls to stay away from him. He soon encounters Elizabeth, the cutest girl in the class, who offers him the Uno's Fog Bar which alters his hairstyle. Immediately, the girls are attracted to him, asking what he plans to do after school. He childishly proposes to play tag, causing the rest of the girls to leave in disgust.

Retrieved from "https://nanatsu-no-taizai.fandom.com/wiki/Uno_Gaiden_Chapter_1?oldid=56882"
Community content is available under CC-BY-SA unless otherwise noted.