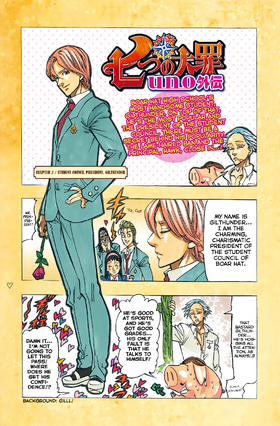 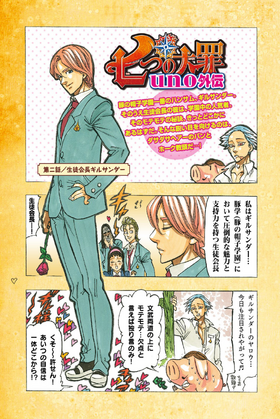 Student Council President, Gilthunder「生徒会長ギルサンダー, Seito Kaichō Girusandā」 is the 2nd chapter of the side story series, featuring the crossover between Nanatsu no Taizai and Uno.

At the Boar Hat Gakuen, most of the students are mesmerized by Gilthunder's handsome hairstyle, whilst Ban and the principle, Hawk, envy the attention he gets. As he was talking to himself, Gilthunder accidentally reveals that his source of confidence is the UNO Fog Bar. Having noticed it, Ban and Hawk quickly steals it, causing Gilthunder to panic the next day. Ban becomes the the center of attention with his new attractive hairstyle. Lacking any confidence, Gilthunder moves around quietly and wonders whether Ban had stolen it. He suddenly notices a frustrated Hawk holding onto his Fog Bar and demands it to be returned.