The Desperate Confession! King with Gowther 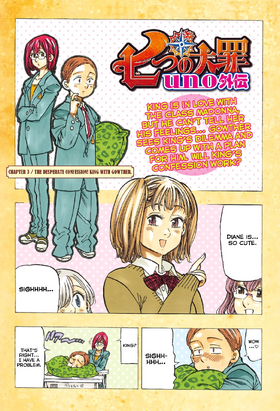 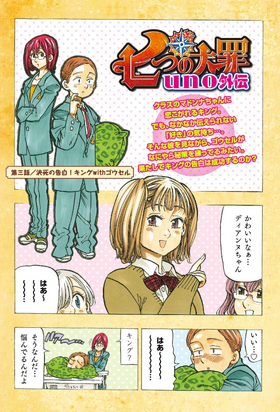 The Desperate Confession! King with Gowther「決死の告白！キングwithゴウセル, Kesshi no Kokuhaku! Kingu with Gouseru」 is the 3rd and final chapter of the side story series, featuring the crossover between Nanatsu no Taizai and Uno.

At the Boar Hat Gakuen, King is captivated by Diane, the class idol, but is having trouble in confessing his feelings for her. Gowther notices King's problem and offers him a UNO Fog Bar, allowing the latter to obtain a handsome hairstyle. King quickly confesses his love to Diane as Gowther cheers him on, however, Diane only thanks him for giving her courage and expresses her love for Meliodas.