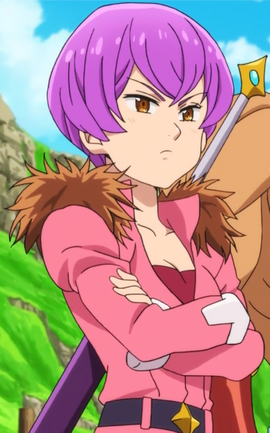 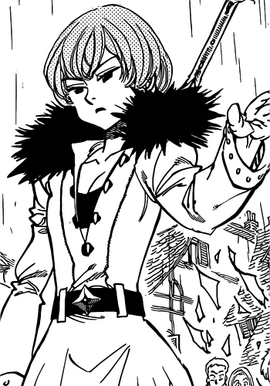 Veronica Liones「ベロニカ・リオネス」 is the second princess of the Kingdom of Liones. The younger sister of the first princess, Margaret[2] and elder to her adoptive sister; the third princess, Elizabeth[3].

Veronica has a tomboyish appearance, short light violet hair and a slim build. She wears a breast binder, stylish pink fur coat, a knight-styled attire, a belt and a pair of long boots.

When disguised as Nikka, she wears a pink Holy Knight armor with a helmet that resembles a bowling ball.

She is described to be a tomboy, who, as a child, liked to often play with swords with the boys, and would be scolded by her father for doing so.[4] Despite sharing the Holy Knights' attitude about enslaving the citizens[5], she cares deeply about her younger adopted sister, Elizabeth.[6][7]

When they were children, Veronica, her sisters, and Gilthunder used to play with each other[8]; Due to her playing with swords with the boys, she would often be scolded by her father.[9]

Veronica doesn't possess any combat skills, but she is always seen carrying a sword. Recently she began training with Guila to improve her swordsmanship. While she has the lowest overall power level of the princesses, she has the highest strength level.

Veronica is Elizabeth's older, adopted sister, and strongly cares about her. She loved her sister so much, that she sacrificed her life in order to save Elizabeth from an explosion mine prepared by Guila. She confesses to Guila she would drink Demon Blood if it meant protecting Elizabeth.

Veronica despises Meliodas and believes that he is a treacherous villain who is tricking her sister, Elizabeth. Her assumptions of his character is built around rumors within the kingdom. However, after Vaizel and surviving it, Veronica seems to change her opinion about Meliodas, as she trusts him and Griamore to protect Elizabeth.

Griamore has been her bodyguard since childhood and appears to mainly acknowledge only Veronica among the Royal Family. He is her subordinate, and is extremely loyal to her, considering displeasing her as absolutely unallowable. He had begun serving her at quite a young age, obeying her orders and playing with her frequently. Veronica is also shown to trust him, shown by him being the first person she revealed her secrets to. It is later suggested that Griamore has romantic feelings toward Veronica, which she appears to reciprocate. He even says that she is adorable the way she is (as a tomboy). When he believed she had died, he greatly grieved over her body and was overjoyed when she returned to her kingdom alive and well. She also grew very attached to him when he was leaving the castle even when there were no duties to be done she called him back to stay by her side. When he left on a mission her eyes were tearing up. At some point after the Holy War ended, Veronica started an official romantic relationship with Griamore.[10]

Despite Guila being responsible of almost killing Veronica back at Vaizel, the second princess of Liones forgave her and appointed Guila as her instructor, telling the last New Generation member to not hold back on the training. They also spend some time bonding and relaxing at the underground hotsprings. Later on, Veronica, disguised as Nikka, was worried for Guila and consoled her after receiving the bad news regarding the Ten Commandments and Gowther's apparent true affiliation with them.

Denzel is Veronica's uncle and he is aware of her stubborn tomboy nature. The Assistant Great Holy Knight stated that Veronica is out of his league compared to Bartra whom she pulled wool over her father's eyes as he easily saw through his niece in disguise among the crowd of Holy Knights, lightly bonking on her helmet. Regardless, Denzel cared for Veronica and said he could not face his brother again if something happened to her. On the other hand, Veronica is fond of her uncle and thanked him for letting her stay after being found out.

Retrieved from "https://nanatsu-no-taizai.fandom.com/wiki/Veronica_Liones?oldid=153026"
Community content is available under CC-BY-SA unless otherwise noted.