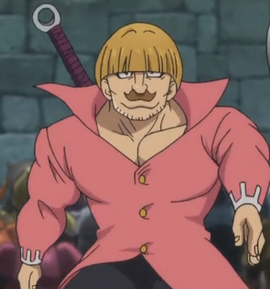 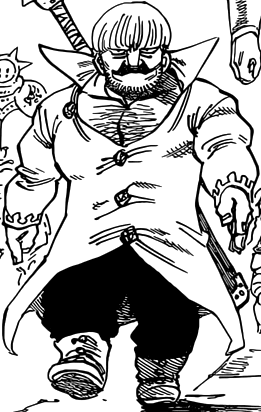 Waillo「ワイーヨ」 is a Platinum-ranked Holy Knight and a member of the Pleiades of the Azure Sky, who serve under the Assistant Great Holy Knight, Denzel Liones.

Waillo is a short man with a strong build of his size and has blonde hair and mustache. He wears a loose version of a regal knight uniform.

Waillo is a silent person, speaking few words and an observant type being able to deduce as to what Meliodas did against Dogedo in their match.

During the award ceremony held in honor for the Seven Deadly Sins, sans Ban and King who are at the Fairy King's Forest and Escanor who is still missing, Waillo and his two comrades, Deathpierce and Dogedo, come forward after Meliodas calls out those Holy Knights whispering their doubts and complaints behind his back.

Waillo watches as Dogedo faces Meliodas, and during the fight, Waillo notes that Meliodas defended and attacked simultaneously, incapacitating Dogedo's hands. Waillo stands by as Dogedo is defeated and sent flying back to Deathpierce, who easily catches him, and Meliodas asks who's next to face him.[1] However, Deathpierce, carrying an unconscious Dogedo, decides that they've seen enough and they leave the scene. As they depart, Hawk, through Balor's Power Eye, reads their Power Levels.[2]

Later at Fersen, Waillo suddenly appears in front of Fraudrin, who is attacking Arden close-range, and blocks the attack with ease, despite the impact destroying part of the town. He flirts with Deldry about being getting married now, much to her disturbance. He then knocks out Fraudrin with one swing of his blade. With their mission complete, the three Pleiades leave along with the captured Commandment.[3]

After the team succeed to captured Fraudrin, they arrested him in a research tower owned by Denzel. Arden, Deldry, and Waillo ordered to guard the tower from the outside while Denzel tried to extract information regarding the Ten Commandments inside. Arden became bored as he played with the Incantation Orb and almost broke it after it slipped down from his hand.

When the situation became intensed inside the tower, Dogedo suddenly appeared, telling the group that he came back after he finished his job to relieve the three from their post and to hand over the Curse Bead. Arden, Deldry, and Waillo using cart head over to Vaizel after being tricked by the fake Dogedo met the real Dogedo who wondered if the three's shift was already over. Panicked, the four headed back to the research tower only found that Dreyfus and Grayroad had already disarm the Perfect Cube that surrounded the tower. Dreyfus stabbed Deldry, later attacked all of them with a powerful magic, destroyed the entire tower and left. Arden and the others are saved by Dogedo's Boost. Waillo goes along with the other Pleiades of the Azure Sky to Zeldon. While Deldrey is healed by a druid, Arden screams his hate for Dreyfus for ehat he did to Deldry, to which Waillo remind him that is in reality a Demon inside Dreyfus, to which Arden reacs angered.

When the Ten Commandments invade Liones, the Pleiades of the Azure Sky helps to fight them. Waillo and the other stays inside the castle while Denzel and Deathpierce comes out to face the demons. When the Holy Knights comes to evacuate the castle, is revealed that Denzel sacrifices his life. Angered, Waillo and the Pleides affirms to Fraudrin that they would take revenge. Then, Grayroad appears having capturing everyone in the castle within her eggs to slowly turn them into servant demons. After Merlin appears and manages to defeat and captures Grayroad, Waillo s taken along with everyone in the castle in Merlin's Perfect Cube to see the battle between Meliodas and Fraudrin.

After the battle, Waillo attends to the funeral of the knights who died during the battle, and cries the death of Denzel and Dogedo.

Waillo is seen next to her companions during the fight against an group of demons. When two of the Four Archangels appears and kill all the demons, the Pleiades are the only ones to show disconform for their presence. During the banquet the night after the formation of the alliance between Liones and the Four Archangels, Waillo and the Pleiades reveals to Ludociel their incapacity to trust on him and the Goddess Clan because Denzel's death at Nerobasta's cowardly actions. In order to gain his loyalty, Ludociel uses his Breath of Bless to give the Pleiades some of his power but also manipulating their minds to turn them into his followers.

When the Holy War is unleashed, the Pleiades are part of the "Search-and-Destroy Force" must directly confront the Demon Clan army. In the way to the battle, Waillo claims his desire of bloodstains. During the battle with the demon army, Waillo is seen killing an Copper Demon with his sword.

When the battle ends with the victory of the knights, Elizabeth argues with Deathpierce about the fact that they must think of those loved ones who pray for their safety, leading Waillo to think of Kaide and Ibaya. When Estarossa appears and unleashes his Black Hound on the battlefield, Waillo is saved from the black flames along with the rest of the knights by Diane who takes them all underground.

On their way to Camelot, the group is ambushed by a new ordeal of Demons. During the fight, Deldry is beaten and knocked down, causing Waillo to help her without noticing the Orange Demon attacking them from behind, however both are saved by Elaine.

18 months after the end of the Holy War, Deathpierce informs Waillo and the other Pleiades that he has decided to quit being a Holy Knight, something he has been thinking about for a long time. Waillo and the others ask him what he plans to do, to which Deathpierce says he will return to his homeland of Edinburgh and dedicate his life to restoring it.[4] They ask him if there is no other reason, to which Deathpierce reminds them that the demons killed Denzel and the goddesses manipulated them, so he can no longer serve a kingdom with a demon and a goddess as king and queen. He declares that he will build a kingdom only for humans, and after this, he leaves.[5]

Due to being a Platinum-ranked Holy Knight, Waillo is presumed to be very powerful. He was shown to be strong enough to withstand a formidable karate chop from Fraudrin with his arm and then quickly defeated one of the Ten Commandments with one attack of his weapon although this was probably due to his teamwork with Arden and Deldry.[6]

Waillo wields a broadsword that he carries on his back.

Waillo seems to be obsessed with Deldry, and is constantly asking her to marry him. Though she values him as a teammate, she is easily annoyed with him because of this habit.

Retrieved from "https://nanatsu-no-taizai.fandom.com/wiki/Waillo?oldid=150393"
Community content is available under CC-BY-SA unless otherwise noted.