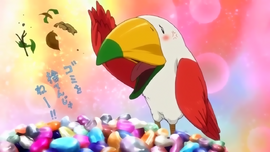 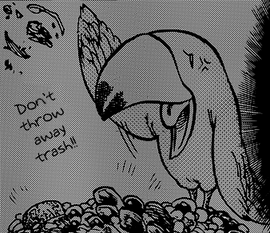 Wandle「ワンドル」 was a talking bird who was Meliodas's former companion when the latter was the great Holy Knight of Danafor. Wandle and Meliodas' had a very similar relationship to that of Meliodas and Hawk. It is unknown how they met.

Wandle is a talking parrot with a stubby red, white and green colored body and large beak. His body resembles that of a Toucan, a tropical bird of paradise.

Wandle's personality appears to slightly resembles Hawk's, with Meliodas nearly mistaking Hawk for him.[1] He is shown to be annoyed when Meliodas leaves his trash everywhere and enjoy collecting treasures.

Wandle was one of the many creatures that the Demon King used to spy on Meliodas from the Purgatory.

He is mentioned by Meliodas to be his partner from a long time ago, during his time as the Great Holy Knight of Danafor.[2] He was later revealed to have died alongside Liz during an attack on the kingdom, which cause Meliodas to destroy the kingdom in a fit of rage.

There are a few elements that seem to indicate Wandle was reincarnated into Hawk. They have a similar personality. Hawk gave himself that name because he has a weird feeling he used to fly, "in a previous life"

Similar to Hawk, he is capable of speaking the human language.

He appears to share a strong bond with Meliodas, despite being irritated by Meliodas leaving trash everywhere.

(Wandle to Meliodas in a hallucination) - "have anything shiny?" - "Don't throw away trash!!"

Retrieved from "https://nanatsu-no-taizai.fandom.com/wiki/Wandle?oldid=146911"
Community content is available under CC-BY-SA unless otherwise noted.